As a save progresses, I tend to focus on playing and not on updating people on what is happening in my save. Some time has passed since my last update so I’ll give an overview of what has happened and what the plan is going forward.

I think I left things off in 2022. That was a long time ago in this save. It takes time to build a title challenging team. It’s not only about getting the right players, it’s settling on a system that ticks a lot of boxes. Is it exciting to watch? Is it defensively sound? Are there a lot of goal threats in the system?

I think over the course of the 8 years I played with Betis, I used three systems quite effectively. The 4231 that I posted in the last blog post. A 442 which saw me using Fekir as a DLF. He was devastating in that setup. And finally, a 433 which was used during my last three seasons.

Overall, I was happy with my time at Betis. We signed some terrific players, we won all three Spanish competitions. Copa del Rey in 24/25, La Liga in 26/27 and the Supercup in 27/28. I qualified for the Champions League every season apart from the year I departed, reaching the quarter final stage twice and the semi final on one occasion.

As I mentioned in that last blog post, sometimes it was one step forward and two steps back as I lost key players from time to time. We were by no means a big club, but I think I’ve cemented them as a challenging force in Spain now. In the time since I’ve left, they’ve won another La Liga title, the Europa League, the European Super Cup and finished as runners up in the Club World Cup.

I left Betis with a 62% win rate and put three trophies in the cabinet. Spain is quite a hard place to win trophies consistently. I definitely recommend managing there, but prepared to be frustrated at times.

After winning La Liga with Betis, my focus was going to shift elsewhere. I was finding Spain a bit frustrating. We were successful, but I wanted to move onto the next challenge. In January or February of 2028, Dortmund approached me for a job interview. It was perfect timing and close to the perfect club.

Obviously Dortmund are less of a challenge than managing Betis, but it’s always fun to battle Bayern on FM. I’ve done it a few times in the past and I’ve left them on their knees. Dortmund had finished 6th the season I took over having been as low as 12th during the earlier part of the season.

I had to do a lot of work on the squad. The lack of domestic players was a concern, but I think I’ve got them going in the right direction now. Much like Dortmund in real life, the plan is to sign young exciting players for as cheap as possible but to inject some experience to support them.

I’m into my third season here and I’ve already won the Bundesliga at the second attempt. It wasn’t plain sailing though as we really struggled against the other big teams in Germany. Schalke, Leipzig and Bayern all handed me a few wallopings. Our form towards the end of that title winning season was a concern.

Now I’m into November in my third season, we’ve got a number of German players in the squad along with a healthy number of exciting foreign players. The only recognisable names in the squad now are Arne Maier (Hertha) and William Saliba (St Etienne/Arsenal). As it’s 2030/31, my side are mainly made up of newgens.

I won the league using a 442 that was quite similar to the one I deployed at Betis. I’ve been trying hard to improve the strength of this system and at present, we’re setup like this. 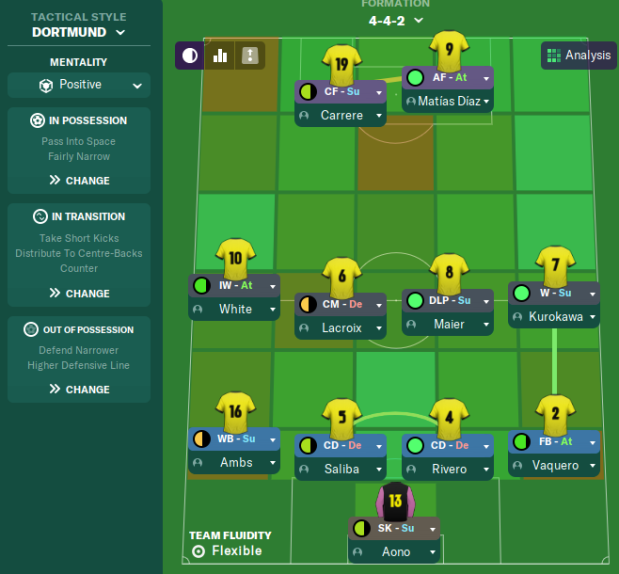 The CM/D will sometimes be set as a BWM/D, but it depends on what’s going on in game. The support striker can also be moved to the AM slot, but usually only if the opposition don’t have a DM and I’m finding that there’s a lot of space between midfield and attack.

We’re doing better since I’ve tweaked my system, sitting in third place, into the third round of the Pokal and still in with a chance of reaching the knock out stage of the Champions League.

I can see myself staying at Dortmund for around 6 years I think. I really enjoy the realism of moving from club to club during the course of a save. I know FM players love the romanticism of staying at one club for the entire life span of a save, I just find it quite boring. Winning is great, but once I’ve won the league title a few times, I tend to want to move forward.

At Betis, I won it once, but if Betis won La Liga in real life, you could probably bet your house on their manager being picked off quite soon after that. It’s also highly unlikely that he’d go onto win a second or third as the Madrid sides and Barcelona would (and did) reinforce their teams.

I’ve not got many league loaded, so I may need to put a few more in at some point. I suspect Italy will be my next destination. Historically, I’ve been dreadful in Italy due to the tactical(read defensive) nature of the way teams play there. Milan would be my preferred team, but they are doing incredibly well just now, so I may need to ditch that idea. Things can change quickly in FM though.

Argentina and Brazil are also on my radar and I’ll likely do a stint in England as well. For some reason, I’ve woke up this morning thinking about managing in MLS as well. I’ve never managed in MLS ever, so I’ll maybe do some reading on how things work there and add it in.

How come you’ve not posted in a while?
Couldn’t be bothered to be honest.

Should we expect more updates?
Probably, but not until I find something interesting to write about.

Have you got Covid-19?
Please see http://www.fmgrasshopper.com for all Coronavirus chat.

Are you still using the DoF for transfers? Is it going well?
Yes

The lack of images in this blog hurt my soul, please use more images in future.
No

Have you got any exciting players at Dortmund?
A few, but I think Matias Diaz stands out. Only cost me €22.5m and he’s been banging them in for me. 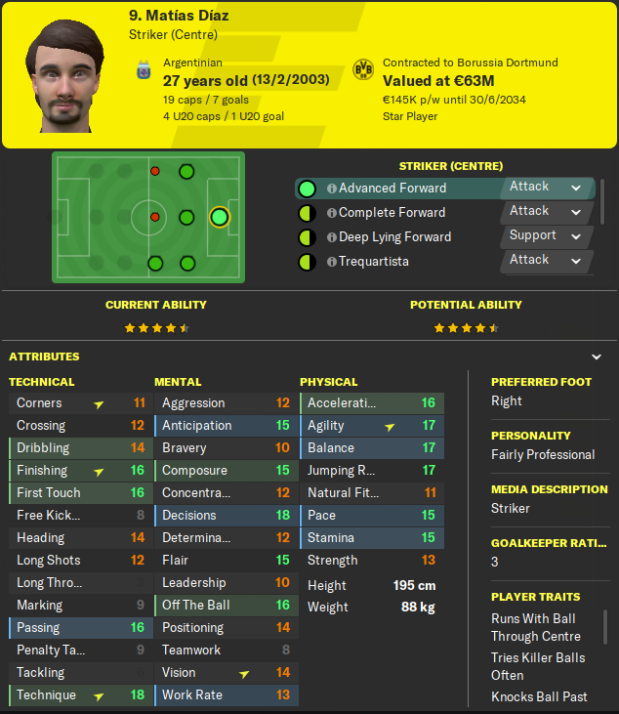