After probably the busiest, most lucrative and most expensive summer in the club’s history, there was still a season of football to be played. I had to fit all of these new players into my system and then I had to hope that they all clicked in and worked as a team.

Last year, we finished second following a disappointing end to the season. We had it in our hands but somehow we threw away our chance and PSG won the title again. We won the Coupe de la Ligue for a second time so not all was lost.

Before I delve into the season, there was one further departure from the club in January. Florian Ayé headed for Swansea for £7.75m(£10.5m) as he wasn’t getting enough games. He leaves as the clubs top league goalscorer on 95 goals in 213 appearances. He was tied with Andrzej Szarmach, but nabbed one goal in his final appearance to make the record his own.

No messing in the cups this year, straight in with the big boys. Usually we get an easy tie in one of the earlier rounds, but in the Coupe de la Ligue, we were drawn in with Lyon who we overcame thanks to two goals from Abdoulaye Sissako. Nice one, another victory over Lyon! Moncao were to be our opponents in the Quarter final and they were just too good for our youngsters, 3-1 it ended.

The French Cup started off with a game at home to Reims. They took us into extra time and we had to introduce Johannes Eggestein to score a 104th minute winner. In the 10th round, we faced my bogey team, Lorient. I don’t know what it is about them, but I just can’t beat them. A 3rd minute goal our undoing on this occasion. They just sat back for 87minutes as we struggled to break them down. Bastards!

The cups usually represent out best chance of Silverware, so I was rather disappointed to go out in these competitions. It was a transitional season though, so it was to be expected.

As we finished second last season, we went straight into the group stage of the Champions League. Not having to play a qualifier is always a boost.

The inevitable happened though. We were to be reunited with Sebastien Lamy. Dortmund knocked me out last season, so hopefully we can beat them this year. Dinamo Zagreb and CSKA Moscow made up the rest of the group.

It didn’t go well. Goals were hard to come by in the early stages of the season and it showed in Europe. 0-0 at home to Dinamo was followed by a 3-0 defeat at the hands of Dortmund in Germany. Two games against CSKA were to follow, 1-1 at home and a 1-0 defeat in Russia. Again, shipping an early goal and not being able to break them down.

A 3-1 win over Dinamo meant that we had to beat Dortmund at home to qualify for the next stage. We had the ball in the back of the net twice, but both were ruled out for offside as we slipped into the Europa League knockout round.

I’m really not a fan of that competition and I again went with my youngsters policy. I was pretty shocked when we managed to beat Porto 1-0 and in the return game, only lose 1-0. Penalties were again to be our downfall as we’re terrible at them and we were out. No big loss, time to concentrate on the League.

After the first two games, 0-0 against Angers and PSG, all I could think was “this is going to be a long season.”

Two clean sheets gave me a bit of hope, but we were pretty terrible in the attacking phase. We followed it up with a 4-0 win over Bastia and another 1-0 victory over Lyon. But when we faced a stubborn defence, as we did in our 1-0 defeat to Metz, it all went to shit. We were hopeless.

I made a couple of tactical changes, I’d be lying if I could remember exactly what they were, but we did switch to a counter attacking mentality to try and create some space. It worked, kind of. But what I wasn’t expecting, was the effect it would have on our defence.

After the Metz game we went on a 14 game unbeaten run and only conceded 3 goals. PSG were to end that run, but only by a 1-0 margin in Paris. I can deal with that. Things were going very well, top of the table with a 9 point lead over PSG, we couldn’t… could we?

As good as we were in defence, we were still a nightmare in attack. Chances were being created, but we couldn’t hit a barn door with a banjo. No joke.

Thank God for our defence though. It ended up being our saving grace. I knew if we got ahead, nobody would really score against us. But man was it really scary watching your team hold on to a narrow lead for over an hour!

Draws were costly and a 2-0 defeat to Monaco, only the second time we’d conceded more than one goal in a league match this season, meant PSG had closed the gap and equalled us on points. Their significant goal difference, meant that they would win the league if we were to lose or draw any games.

PSG drew 1-1 with St Etienne in their second last game which meant we had a two point lead going into the final game. I needed to match or better their result to win the league. They faced Marseille away and I faced Angers at home.

I thought I’d live Tweet the game out since it was a title decider. 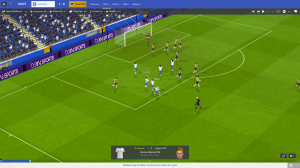 I had the latest scores widget loaded up, if they won and we drew, it was over. Come on Auxerre, come on Marseille!

10minutes into our game, Maillard popped up with a lovely headed goal after a rebound from a set piece. 1-0! Oh God, not one of these early goals to give me hope and then bottle it in the last ten minutes? I’m pretty sure 1-0 was our favourite score over the course of the season though, surely we’d hold on?

I was transfixed on the Marseille score. Even as chances were falling to us, I was waiting for news. In the 32nd minute, Isaac Success put Marseille 1-0 up! Both results were going my way. Don’t concede, don’t concede was all I could say to my boys!

47th minute… 1-1, in the Marseille game. Icardi levelling things up. It remained 1-0 in Auxerre, we were probing for an opening, but as had been the case all season, we were unable to break them down to grab a second. 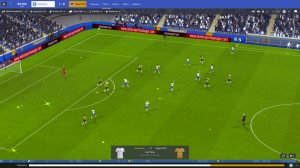 Marseille grabbed a second in the 73rd minute and it was matched 8minutes later to make it 2-2. As long as we could hold on, we were winning it. Angers were piling on the pressure though. Do I switch to contain and try to hold them off? Put 11 men behind the ball and try to deal with the pressure?

Fuck no! Even if we drew at this stage, we’d still win the league. 90+3… PSG go ahead! But it doesn’t matter… WE FUCKING DID IT!

How the hell did that happen? After losing all of our best players, we’ve gone on and won the bloody league! It was the most nerve wracking season I’ve ever had. Look at the table.

When you see this, you’ll think “how the hell did he win the league?”

I’m asking the same question, we weren’t great. Goals were not very forthcoming and were spread out thin. Eggestein finished as top scorer and after him, Maillard and Jovanovic were tied on 9 each.

Sofiane Loucif and Ahmet Öztürk had our highest average ratings. In fact, all of our defenders had pretty good ratings, so there should be no surprises there.

New players were hit and miss. Jovanovic and Davila showed some great signs. The Dabo’s were ok, not amazing though. Eggestien scored goals, but it was a struggle. Nobody in the final third was that great though.

There’s a significant number of youngsters in the team now. Muller, Thomas, Vieira, Kasongo, Maillard, Genreau, Thiebaut, Nefzi, Garnier, Bouillot, Clerc, Boy and Outtara have all either come through our youth intakes or been signed at a very young age to be part of our youth system. All have contributed in some way to this season’s success and will likely feature more in the future. Vieira is our captain and has been our replacement for Lamy. Not quite of the same standard, but he’s still rather good.

Over the past few seasons, I’ve been pleading with the board to upgrade facilities to improve the level of youth for our team and to help them reach their potential. They’ve sometimes taken a bit of convincing, but they’ve done it in the end. Our Youth Facilities, Junior Coaching and Youth Recruitment are all at their highest levels. Training Facilities are also undergoing massive work, which is underway and has a two year development. I suspect this will take it up to the top level.

At the end of our fifth season, due to skyrocketing attendances, the board announced that they were going to be looking to build a new stadium. We were selling out games regularly so it was a good step. But no further news was forthcoming.

This season, we sold out 15 of our 19 home games and I was convinced that I was experiencing some sort of game bug or that I’d missed the news that we weren’t getting a new stadium. There was nothing on the Board Request Status screen, but I didn’t request a stadium, so that makes sense.

Finally, at the end of this season, an email popped up.

Our current capacity is 21,379 so it’s not a huge upgrade, but I suspect we’ll be able to expand it? The funds from player sales is looking like clever business now. The board must have been waiting for us to have enough money in the bank.

So that’s that, new stadium in two years and a League title in the bag. Need to try and crack on in Europe next season and remain in the top three places or this new stadium is going to be empty!

Thanks again for reading, the feedback has been great so far, but still plenty to achieve.