Well, with all of those players buggering off to play for bigger clubs, Lo Celso aside, I had a big job on my hands to try and replace them with capable replacements. We obviously had a huge transfer budget now, but I wanted to keep things sensible. If a super player was available, I wouldn’t hold back. I was aiming to keep signings to a max of £20m per player. That’s still a lot of money for us, a huge amount in fact.

So lets see what we got. 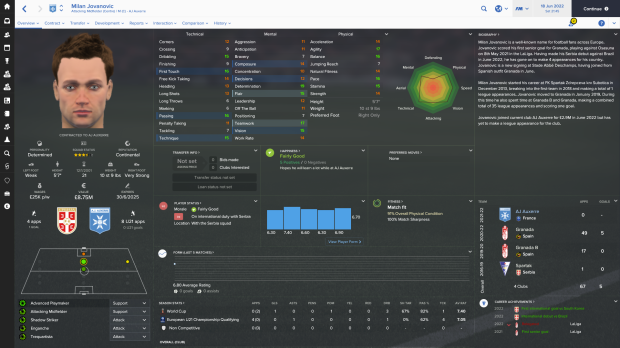 Before anyone had left last summer, Jovanovic was in the door. Serbia create some of the best newgens in the game and this guy looks like another great player off of the production line. Good passing ability, quick and most importantly for me, he works for the team. He cost me just £2.9m from Granada, despite having a £15m release clause. I had planned to use him on the right of midfield, but changed my mind and instead decided he’d be better off in the middle. Definitely one I could sell on for a higher fee in future. Will effectively be Lo Celso’s replacement.

Yannick appeared as a result of my African search filter and my scouts really liked the look of him. Due to his dribbling ability, I thought he’d be a better option to use on the right in place of Carvalho. He ended up costing me £15m, which seems a fair reflection of his ability. He’s got a good smattering of attributes, his intelligence is obviously of huge benefit to the team. 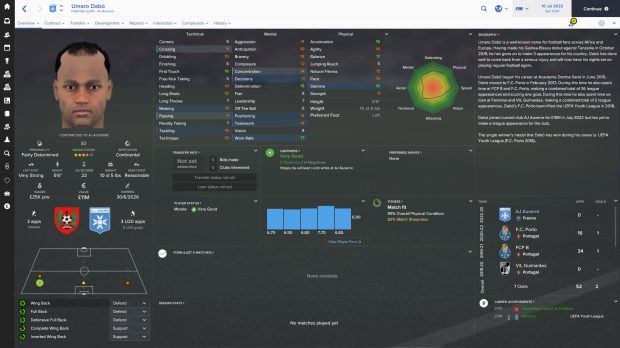 Despite also being from Porto and Guinea-Bissau, Umaro is not related to Yannick. I don’t think I’ve seen brothers in FM from newgens, has anyone seen that? With Despres leaving for Newcastle, I needed another option at left back. He’s not quite as good as Thiebaut, but will certainly offer a decent alternative should he lose form or get injured. Porto weren’t willing to budge on his price and I paid £15m for him. Not sure if this was a good transfer or not at the moment, but time will tell.

Eggestein wasn’t brought in to replace anybody. We needed quality options up top as I was worried that Maillard, Ayé and Bouillot weren’t going to be good enough for us in the Champions League. I was really looking for a great French striker, but they seem to be in short supply. As you can see, Eggestein hasn’t had the best of times lately, he hasn’t scored a league goal in 3 years. Napoli were selling him cheap as things had gone from bad to worse for him in Italy. I’d looked at signing him a couple of years ago when he left Bremen, but he was just out of our price range then. £15m seemed to be a decent deal for a young German who could play a variety of roles in attack. This gave us options and a bit of versatility to add to our current attacking players. 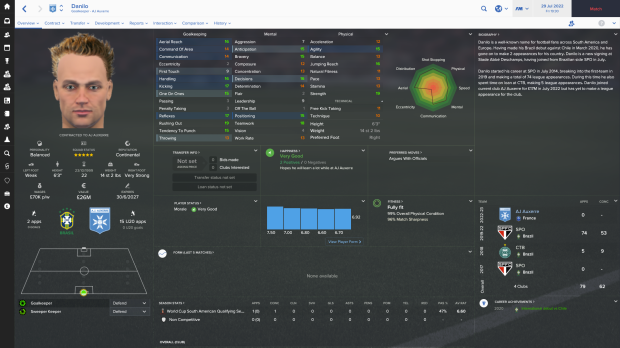 I found this guy while looking for a new keeper. Wow, he looks great I thought, better have my scouts run the rule on him just to be sure. “James, this guy is great!” Cool, I was right! It wasn’t easy negotiating a fee, but Sao Paulo eventually settle for a £17m (£20.5m) record deal. That still left me with change from the Meret deal and now we’ve got a better keeper. Brilliant! 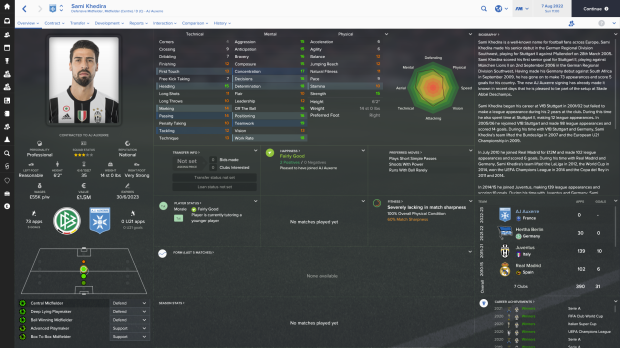 Bear with me on this one. Khedira is not Lamy’s replacement, no no. He’s been bought with the sole aim of tutoring younger players. His experience is unrivalled, winners medals litter his career with club and country. He joined for free as his contract at Hertha Berlin had ended and signed a one year deal. If he’s good enough, he can potentially join the coaching team. I had considered signing Mkhitaryan, but he wanted to be a key player, which I couldn’t allow him to be.

My scouting team were rather excited about this youngster. He was free and I thought he was worth a punt. He’s got decent potential and his attributes don’t look too bad. I’m not looking for him to set the world alight, but I’ll give him some game time in the cup competitions and in less important games to see what he has to offer. If he doesn’t work out, I can always sell him on for a wee profit. 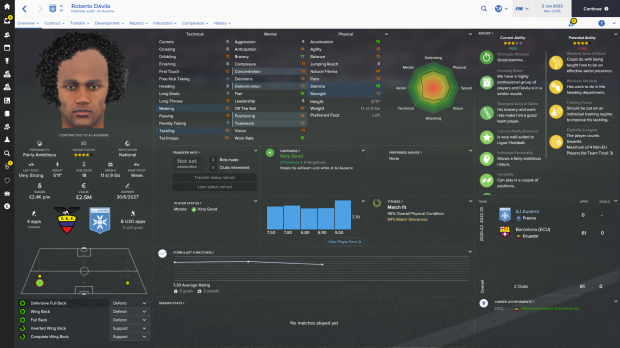 I think I found Dávila just about a month too late. He could’ve saved me a few million pound when I think back. He suits us much more than Dabo does, but he’s one more for the future, especially as he’s so young. I signed him just after the transfer window closed for £4m from Barcelona (ECU). With game time, I think he’s another that can develop nicely.

So, the two Germans aside, I snapped up all newgens. I think I’ve done pretty well to not go mad with money really. I’m hoping that I’ve struck the right balance on signing players that will grow and then will be able to move on in a couple of seasons for a big fee. It’s always the plan when I sign players. Unless they are young and French, which none of these guys are due to prices, I’m not looking to hold onto them for forever. I might find the odd special player that changes my mind, but with foreigners, I’m ok with them leaving.

There were some changes to the backroom team this year as well. It was the busiest I’ve been with staff arrivals and departures. I decided to let a few of the weaker staff go and replace with players that were more suited to my style. The under 19’s even got some great former players joining the setup.

Names that you’ll recognise are:

Some of those are big names of the game. I’m not sure how much their past experience really matters in the game, but I like to think that it adds an edge to my coaching team, besides, that’s going to be a great five a side team!

And there were are, up to date with all the arrivals for this season. Apologies for splitting it into two posts, but I’ve never lost so many big players in one window before. I was caught out by a couple of the departures and I’m not sure if the arrivals are of sufficient standard to replace them. Time will tell on that one.

Season is well under way and will likely be well and truly over by the time this is out, so I’d imagine that update will arrive shortly!