For my next save, I wanted something that was more of a challenge and/or not in the top division of a country. I didn’t want to focus too much on the tactics, but more on the development of the club. I looked at some smaller nations that I could help develop and grow, Scotland being the first choice since it’s where I’m from. I was in Poland a few years ago so considered a club and country save there. I even thought about the craziness of South America, but none really got me that interested.

Finding a club is usually a challenge for me, so I spent a while away from the game and just did some reading about different teams. I thought it would be a good idea to try and revive the fortunes of a team. Not a team that had fallen all the way down, although I did consider that, but one that had lost their way a bit.

Scouring Europes leagues, I stumbled upon French Ligue 2 side, A.J. Auxerre. The team that brought us Cantona, Mexes, Sagna and Cisse. In 1996 they won the League and Cup double and won the cup a further two times in 2003 and 2005. In 2012 they dropped out of the top division and have so far, have failed to finish higher than 9th.

And that’s where I step in. So, where do we go from here?

The short term aim is obviously to get us back in Ligue 1 at the earliest opportunity. However, I don’t imagine it being an easy ride. The squad isn’t the best so I’ll be hoping for some good fortune to get us there. I anticipate it taking 2-3 years at least. I think if I get up first season, we’d struggle to hold onto our Ligue 1 status and it may do us more harm than good.

Once we’ve achieved Ligue 1 status, the goal is to build the squad and work our way up the table. It would then take a few years before we would be classed as an established team. As I go along, I will be trying my hardest to develop players for the first team and maintaining a sound financial footing. 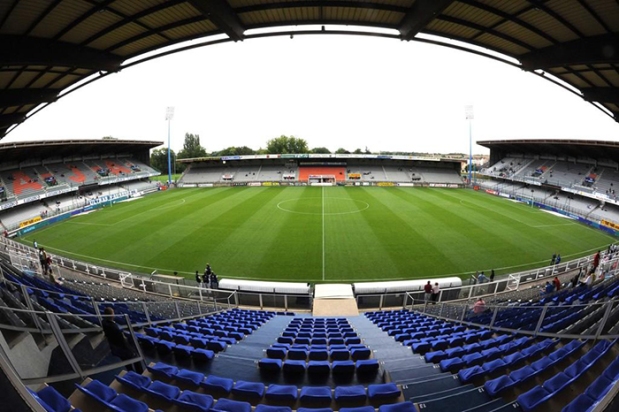 We have reasonable facilities, but there’s room for improvement and I think long term, we should be looking to develop our stadium to increase revenues as we grow. At the moment it only has a capacity of 21,379, I’m sure with top flight football, we could sell that out on a regular basis and convince the board to improve. It’s not been renovated since 1994, so it’s a bit dated in that regard.

As mentioned, I’ll be looking to develop youth, but at some point, that will be my main focus once we’re established. I want Auxerre to become a hub of French talent that churns out the next Cantona, Zidane or Benzema. It’ll take a lot of work to get us to that point, but I think it’s achievable.

Tactically, I’m using a formation that I’ve never used. Our squad has plenty of central options so my first thought was to use a diamond. The obvious pitfalls of that formation are the lack of wide players to help in defensive phases. One suggestion I kept seeing was to use a flat midfield three to push the outer central midfielders a bit wider, which would help the full backs. So, 4312 it is. I’ve chosen a forward three that should create and exploit space. My midfield balances forward runs and defensive stability while the back four offers width and steel.