Ok, I’m pretty sure I said in the last post that I wouldn’t be doing any more writing on this save, but things happen.

I’ve been struggling massively to get to grips with any new save. Trust me, I’ve tried loads. I even tried holidaying 6months to make it a bit more interesting. I got a job, saved them from relegation, made plans for the team development, transfers etc, new board came in and sacked me. I hate you Karl Oyston!

Anyway, in such a situation, I just carried on with my Liverpool save. I planned to do this anyway, I am a Liverpool supporter after all. I did a bit of reading on Twitter and saw that RTHerringbone, Rashidi and Cleon were talking about attacking football. Rashidi did a great video on his Youtube channel that gave me a bit more of an insight into team shape. I wanted to put that in action. I should mention that although Cleon has since stopped writing, he did put up a great piece on attacking football which is worth a read.

Following on from what I was doing with my Liverpool tactic, I thought this was a pretty good next step for them to take in the tactical development. I’d built a squad that works hard, were intelligent and were technically gifted. Why not see what attacking football could bring to the table?

I did just that.

I’ll be honest, it was an experiment that I thought I’d try for two or three games, get nervous and switch back to control, but actually.. this worked, bloody hell it worked well!

I’m always very conscious of my teams defensive stability. I want clean sheets, I want them all. I don’t want to be conceding 3+ goals in a game. I can handle 2, as long as we win, but 0 is always preferred.

Lets take a look at the setup… 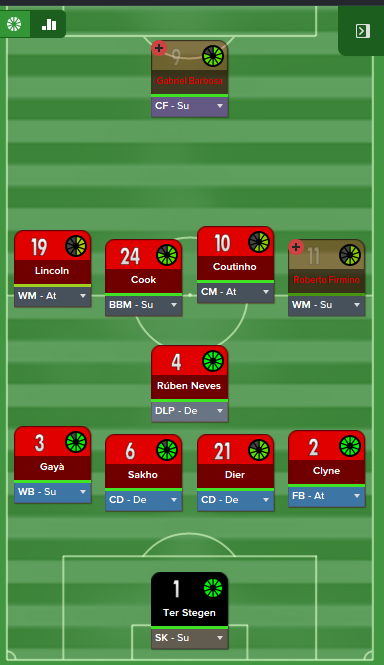 Ok, ok.. I’m a creature of habit. I’m like Garth from Wayne’s World (“Change? We fear change!”) but with me having the mindset that I want to get close to Liverpool 13/14 v Arsenal, I’m not going to change too much. The keeper does have a support duty instead of a defend duty now though!

With Instructions and Team Shape, there was one change, aside from shifting to Attacking Mentality. We’ve just added the higher defensive line compared to last season.

Fluid and attacking was always a no no for me in the past. Things would just fall to shit so easy. But I’m making more sense of it now, especially with the formation I’m using. The support the midfield is offering to the attack is brilliant and they transition very quickly.

Here’s a little look at some screen shots from a 6-0 humiliation of Man Utd.

10 seconds in and the whole Man Utd defence is pinned back. By the time the cross comes in, there are three Liverpool players in the box with Neves sitting just a bit back to guard against a counter or recycle any loose balls. 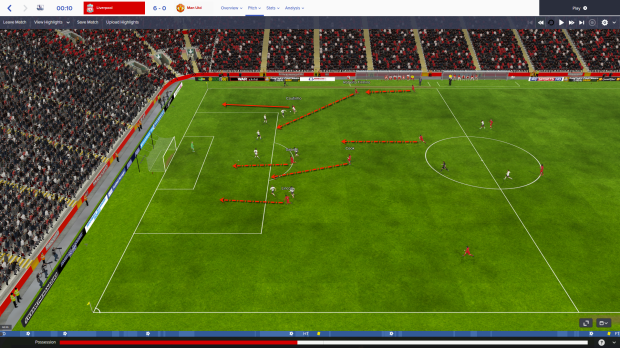 Gaya has just picked the ball up from Sakho. The teams shapes are pretty obvious here, 4141 vs Man Utd’s 442. They’re sitting off just a little and we’ve got room to move the ball about the middle. 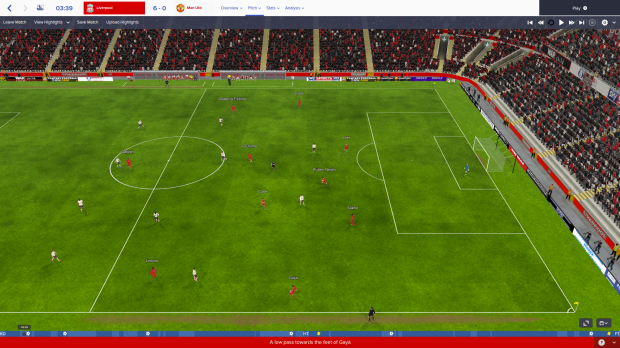 We collect the ball deep in Man Utd’s half after some good pressing play, Cook knocks it into space ahead of Firmino. The runners are all over that. The opposition full back has to track Firmino but he’s on the back foot as Bobby is already in his stride. Cook had the option to play to Gaya or Lincoln to the left, but the aggressive nature of the attacking mentality means he’s more likely to hit the dangerous/risky pass.

The move ends with Gabriel putting us 1-0 up.

Something we saw a lot in 13/14 from Liverpool was balls over the top of defenders with the striker running onto them.

Cook has picked the ball up deep, but look at Gabriel, he’s already readying himself to dart in behind the defender. He has space to run into and if he wins the foot race, he’ll be in on the goalkeeper.

And the ball comes, and he’s in one-on-one. He misses this time. It seems a bit like “long ball,” but it really isn’t. It’s very aggressive.

This is quite a common sight when playing attacking football. We’ve just lost the ball, but due to us pushing the opposition back, they have to go long which essentially just ends with them conceding possession. They’ve got two men to hit and if the striker does win it, they have to be pretty accurate with their knock down.

Pretty much my entire midfield wants to get forward to support any attacks. We’ve found ourselves in a counter attacking situation here. Firmino picks the ball up on the far side, slips it into the path of Clyne who makes it a 5v3 situation as the entire Man Utd midfield/attack are left forward or out of position. The three men circled are the only Man Utd players that get back. 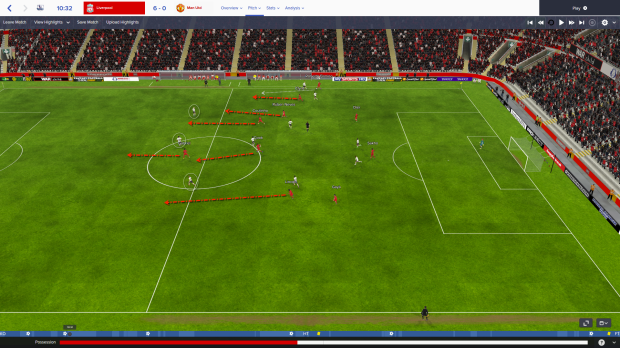 If this was my backline, I’d be panicking!

Man Utd are being broken down very easily here.

This is my little defensive triangle. It’s quite a useful little thing. Neves will go forward a bit more against one striker opposition, I’ve not asked him to, but against two strikers, we’ve got an extra man. Neves sitting deep collects a pass back from up the pitch and immediately switches play to the other side to find Clyne in space. It’s basic overloading on one side and switching play quickly. Neves has the “likes to switch ball to other flank” and “tries long range passes” PPM’s, which he is being put to good use here.

By now Man Utd are resorting to hoofing it long a lot more than I think they’re comfortable with. They are disjointed, the midfield isn’t being given space to move and we’re winning all of the aerial battles. It’s wave after wave of attack. Smalling could pass this inside, but we’re in close proximity. Hitting it long is the only chance of a reprieve. 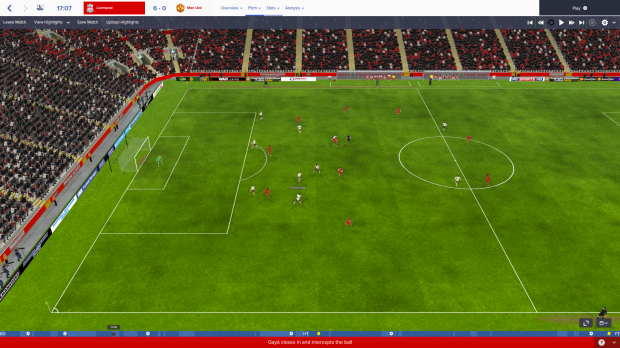 And due to our ability to transition quickly and the support we have going forward, a matter of seconds later, Coutinho is clean through on goal. 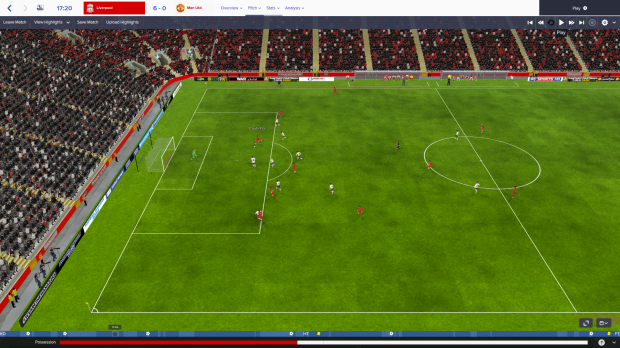 I don’t want to go on and on. We were good in this game. We’ve pinned a very good side back like they’re at the bottom end of the table. Man Utd are third in the league, having a pretty good season and are pretty dead certs to get into the Champions League with three games left.

The high pressing aggressive attacking nature left them with only one option when they had the ball, which was to punt it long. We found space in and around their defence with ease. When they did get forward, we were solid defensively and were always ready to pounce. It’s very exciting to watch this style. I’d forgotten just how exciting it was. I’ve been playing on counter or control for the past couple of years so this is a big step up in mentality.

Just showing how Man Utd were forced to hit the ball out from the back, this is their intercepted passing map from defence. 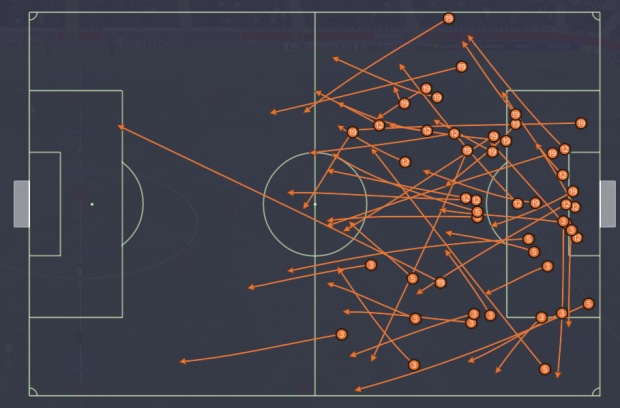 This is their completed passing map for the whole game. They barely penetrated us (ooh Matron!) the entire game. Nothing much to worry about there.

It seems a bit odd to look at the opposition admittedly, but we’ve forced that by being on the front foot. It’s defending by attacking. Eith our pressing game, teams rarely get out. We’ve obviously lost a couple of games, but one was certainly down to my own naivety in thinking we could walk the game(Liverpool vs Chelsea 2014 anyone?)

With our fluid team shape, our midfield gets up to support the attack very quickly. Seeing all those little computer men running forward is very entertaining indeed.

I’d built a team that was suitable for attacking football in my opinion, it’s not for everyone I don’t think, but with the right players and right right setup, it can be super efficient and at times, ruthless.

Thanks for checking this out!