There’s been a familiar pattern emerging on my blog for the past couple of years. I start my save, I do a couple of posts and then disappear. I’ll not promise that’s going to change this time round, but I’m planning to do a bit more than in previous years. (Did I say that last year? 🏃‍♂️💨)

For FM20, I’m going to try and slow down things a little bit. I got to 2045/46 on FM19 as I plundered through in the hope of finding a team I was interested in working on. I never really got that big of a connection with a club, or wanted to develop players at one side over a long period. I lasted 5 years at Wisla and I think I managed Auxerre for 9 years before moving on. It all felt a bit samey. So.. FM20…

Looking For A Club

Ok, the title gives the club away, but there was a process that I went through to get to this point. It’s not rocket science, but it’s always good to explain the thinking behind the decision.

I spend a fair bit of time driving for work, I use that time to plan things out and on this little journey, I started planning my FM20 save. The first four items below are important the last three are a bonus. If a club fits all of these criteria, it might be too good to be true. 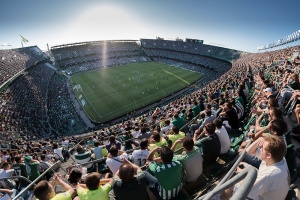 That’s all pretty standard, I like architecture, so aesthetically pleasing stadiums are a winner. I’ll have to see the kits a lot, so if I don’t like them, that’s not gonna make me like the club. Having a player I can identify with can be interpreted in any way you like, you can take that as just being a player you know, a player you can build a side around or a player who personifies your tactical identity. Not being in the top continental competition is important for the longevity of the save, I don’t want it to be easy.

The next lot of attributes aren’t so important, a good Direct of Football and Good Facilities is something I can work towards. Having a good nation for youth players is kind of important to me though, it will fit in with the long term plans of my time at the club.

I instantly ruled out France, Germany and England as possible nations to manage in as I’ve done them to death. Italy, Holland and Mexico were front runners, but I shifted my focus. Those are nations I want to do a save in, but this year, I’m going to Spain.

As I’ve been writing this article, I’ve been reading more and more about Betis and it’s getting me excited for the save. So I’ll get to the reasons why I chose Real Betis other than them fitting the criteria above.

Seville has two great clubs, Sevilla and Real Betis. Their derby, El derbi Sevillano (or El Gran Derbi) stretches back to 1915 and is said to be one of the fiercest derbies in La Liga. I quite like Sevilla, I’d considered doing a save with them in the past, but now they are my enemy and one of the goals of the save will be to shift the bragging rights to the Verdiblancos.

I also remember back to old CM’s and FM’s when Betis had some great ‘FM players’. I actually found a great blog post written by @cm9798 that profiles that very squad I’m getting nostalgic about. I’d always sign a couple of players from them. I never actually managed them in that era though.

Then there was the Denilson World Record Transfer from 1998… you know, the one that didn’t really work out? We’ve all made a big signing that went bad, but for some reason I always remember this being one of the worst.

In the past 20 years, Betis have been relegated three times, returning to the top flight in 2015. Back-to-back top ten finishes has seen Betis establish themselves as a good mid-table side.

They’ve been signing players quite wisely over the past few years and have assembled a decent squad. The likes of Willian Carvalho, Marc Bartra, Sergio Canales and Nabil Fekir all ply their trade at Benito Villamarín. There’s not a whole lot of depth in the squad, but if players stay fit, they’ve got a strong 11. I’ll profile some of those players in a future post and focus on the thinking behind any additions.

All of this is very interesting to me, a decent squad, a competitive local derby, a bit of nostalgia.. lovely stuff!

Having a plan for the club is a great way to track your progress. Obviously, we all want to win trophies, but there are other ways to be successful in your save. Things like player development, a strong transfer strategy and creating a tactical identity are all very satisfying when it comes together.

I  want to continue with the top ten finishes, but at time of writing, Real Betis are sitting in 18th place in La Liga. This might end up being a bit more of a challenge than I think! The squad is certainly strong enough to be in the top flight, it’s all going to be about getting the system to work.

I really enjoy developing youth on FM. It’s great when you get a player on a youth intake and he becomes a starter for the club. It’s not something I’ve placed a great deal of emphasis on in the past couple of FM’s, but it’ll be important to this save.

There’s not a lot of cash available at the start of the game. I’m hoping to strengthen a couple of positions with either loans or freebies. The Director of Football will be an important part of any recruitment process I do as I won’t be handling negotiations. In Spain, I’d be lucky to get to pick the players I want, so I’ll get to set the targets and the DoF will try to get them in the door. My DoF will also handle negotiations of contracts for any players or staff I want.

La Liga is a tough nut to crack due to the strength of the top clubs. Real Madrid, Barcelona and Atletico Madrid have exceptional teams filled with top quality players. Trying to be the best of the rest will be a tough challenge, especially when you consider some of the competition. If I can do that regular, then we might get lucky if one of those clubs have a bad season. I’m not holding my breath, it’s likely our best chance to achieve something special though.

Spanish clubs have dominated European competitions over the past ten years, winning six Europa League Titles and six Champions League Titles. How the hell do you break your way past that? That’s the standard I have to aim for, it’ll be difficult, but I’m looking forward to the challenge.

Are you really going to write more blogs?
I’m literally about to start another.

Will you share your skin?
That’s creepy. Oh, my FM skin? No.

Who’s your best player?
You’ll find out in a future blog post.

When’s the beta out?
When it’s ready.