Hello, remember me? Yes, it has been a long time since I last wrote about FM and indeed my Auxerre save. Forgive me. After the success I had in the last couple of seasons, I had sort of worn myself out of FM. I really wasn’t enjoying playing and I think that translated into my writing a bit too.

I tried to keep going, but I knew it wasn’t going to be great, so I just decided to stop for a while and do other stuff instead. I still dabbled in FM but I wasn’t playing as prolifically as I usually do. I had a couple of seasons in another save with Borussia Monchengladbach, a journeyman save and a little Liverpool save, but I felt no love for those and my Auxerre boys were calling me back…

So go back I did. And boy am I glad I did. This team is probably one of the best FM sides I’ve ever had. We’ve got quality all over the park and they’re all so young.

I’ll not bore you too much with the details of players etc, but there have been a lot of comings and goings in the past few seasons. You know me, I like to mix things up when it comes to transfers. A lot of players have made the step up in terms of their progression and have turned into world beaters.

I actually started writing this post about two months ago and again, I told myself that that was the end of my relationship with Auxerre, this has been sitting in drafts for a long time.

The team was in a pretty good shape, but I thought we needed to strengthen the spine of the side going into the new season. That was going to be very difficult though as we were set to fail FFP. That would be a disaster as it could result in a season out of Europe. Not a risk we can take, especially as we make very little from domestic TV deals and such. I was going to have to hold off on going crazy with new players.

I got right into it, making a list of players I could sell off due to either having enough options in my team already, or there being a suitable replacement in the transfer market for a reasonable fee and lower wages. I ended up selling eleven players, raking in £261m. Man City accounting for £161m of that on the four players they took off our hands.

Looking at the squad, I was certain that I could get by with one signing, a left sided midfielder called Jakub Radomski who set me back £25m (£30m) from Stade de Reims. A young energetic player who I expected could assist and score with ease.

That was the end of my transfer business, or so I thought. I’m not usually one to have my head turned by a transfer deal, but when a player you’ve wanted to sign for a long time hands in a transfer request, the transfer klaxon goes off and all sense of morality goes flying out the window. This is how I imagine it is for girls when they go to see.. I dunno, some big hunky bloke who sings good. You get my point.

Do I try and make this deal happen? I need a new central midfielder, but do I need to spend £60m on one? What about FFP? THINK OF THE CHILDREN! Dammit James.. ok, look at the FFP chart. £80m to the good? BUY HIM!

How I felt when the news item appeared in my inbox

It was deadline day though, I had to be quick or I was going to miss out on this opportunity. PSG have bid. Fuck, fuck, fuckity, fuck fuck! Just don’t go crazy with his wages. The devil is already on my shoulder “PAY HIM BITCH, MAKE IT RAIN!” 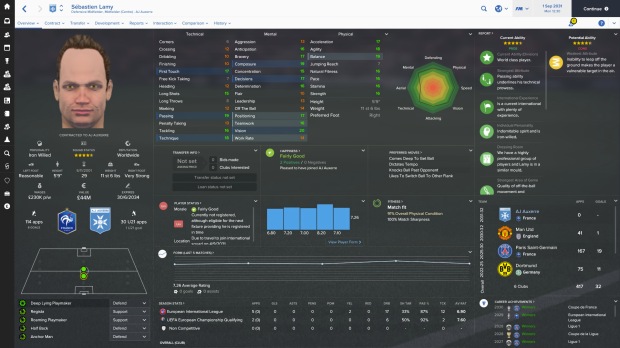 9years after leaving, he’s finally back! Dortmund, PSG and Man Utd have all had him, he’s now made £273m worth of transfer activity. I paid £4m more for him than when I sold him to Dortmund in 2022. I made him French captain (oh yeah, I was France manager for one year) when I was in charge.

If you don’t know who Lamy is, then I suggest you take a look at some of my earlier Auxerre posts. He was my best newgen who arrived in my first ever intake. I had a right dilemma when it came to selling him.

So that leads me into the new season quite nicely. I really enjoyed this save when I’ve played it, so I’m hoping to pick up where I left off and carry on with the success I’d built up before I pissed off for 6months.

Just to make things a lot easier for myself, I am about to move home in the next 10 days, internet will likely be a no go area, that means my next update might be a little while down the road, but I’m still planning to continue with this save.