Here we go, season 9. I’ll admit, I’ve become a bit sluggish at writing just now. Not through lack of enjoyment, quite the opposite. I’m enjoying playing as Auxerre very much and the only gripe I’ve got is that I’m getting pissed off at my tactics not working as I expect they should. Lots of chopping and changing has gone on and I’ve been on a tactical journey of sorts. Every time I think I’ve nailed it, something goes wrong and I change it. That’s probably my biggest problem. I get frustrated very easily, especially when we don’t score goals.

Anyway, two titles in a row is a remarkable achievement. It’s taken a while to grab a title, but that’s part of the fun. Very happy that we’ve managed to do that and get into the later stages of the Champions League. This year, I’m aiming to challenge for the title and hopefully grab a third one in a row. I expect a tougher challenge from PSG this season as they finished fourth last year but did win the Champions League. They’ve spent big this summer, £124m on two players, adding to an already experienced squad.

The Chairman better get the chequebook ready!

Which reminds me, the club was put up for sale at some point last season. There had been a couple of offers, but both had failed. In November this year, we were put under a transfer embargo as new owners pushed through a deal. It was finally wrapped up and they gave me this message.

No further investment, but the club was on a good financial footing due to my transfer dealings. They didn’t have any plans to sack me so that suited me to the ground. I’ll be encouraging a philosophy based on youth products though.

I’ll start with departures this time as there were a few that influenced my arrivals.

Bartosz Olcha was the first out the door, joining West Brom for £3.6m. Ahmet Ozturk was ahead of him and Olcha wanted first team football.

Yannick Dabo was a player I was quite excited about when he arrived but in his two years with me, he was a bit.. meh. Sporting snapped him up for £15m, which was what I signed him for.

A said at the end of the last post that Sofiane Loucif was a wanted man. He asked if he could leave and I agreed, if the right offer came in. Juventus offered me £40m, which I couldn’t turn down. I signed him for £925k and got five very good season from him. Disappointed to see him leave, but understandable.

My other big name departure was Danilo, the GK I signed from Sao Paulo two years ago. He’d had a few teams chasing him. Again, he asked to leave, I knew it was coming and I agreed he could go if we got a good offer. Arsenal offered £30m and off he went. In 90 games, he kept 47 clean sheets.

The remaining players to leave were squad players who I had better alternatives for. Bouillot joined Bastia for £2.5m(£4.1m), Thiebaut headed to Metz for £4.5m and Nefzi to Rennais for £6.25m(£9.5m). Jean-Baptiste Girard(U18 player) had signed a pre-contract agreement with Man Utd two years ago, but had to wait until he was old enough to move, he joined for £825k. Total transfer income was £103m.

I obviously needed a couple of players this summer. A goalkeeper was top priority, but bloody hell it was difficult to pick one that I liked for a decent price.

Ionut Radu had spent five years with struggling Liverpool before I snapped him up. He was the best option at the price point I could find and joined for £15m, exactly half of what I sold Danilo for. Still only 27, he’s got lots of GK years ahead of him. Ideally I’d have signed a Frenchman, but there’s nobody of the required standard available right now.

I didn’t need to replace Loucif as I had enough central options already, but I wanted one more player with experience to tutor some of the youngsters. I opted for Nicolas Nkoulou from Lyon who I signed for £250k. Now 34, but with bags of experience and a good personality type.

Record transfer klaxon! I had been watching this player for two seasons and this summer, I pounced. Real Madrid had also made an offer, but he’s obviously seeing us as a good chance for first team football and building up experience. Flavio Barone joined for £31m from Palermo. I think he’s great and still has time to get better. Interestingly, with no tutoring, his personality type has changed to Model Professional from Professional. I’ve never seen that happen before.

Kullman Jiménez was another South American player that my scouts had recommended to me. His physical attributes for a 20 year old were brilliant and he had the mental attributes I’m always looking for in players. Lots of development in him yet. He signed for £13.5m from América (MEX). 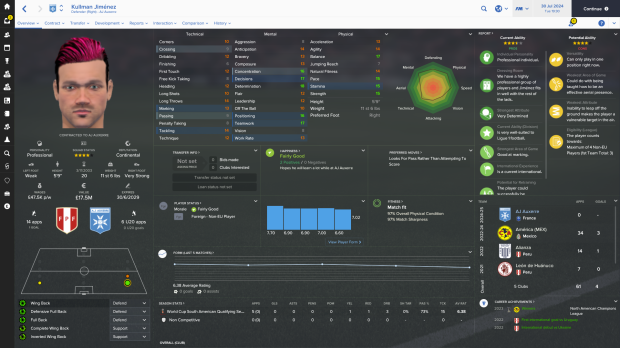 I made one signing in January. I felt we needed another attacking option so snapped up Rubén Martinez from Athletic Bilbao. Physically very good and his off the ball movement should cause problems for opposition defenders. Can play up top or from the right. He cost me £28m, but I think he’ll prove to be an important player.

I also managed to sign Lionel Messi and Luis Suarez… as coaches. Lots of experience in my coaching team now!

Another season that is opened up with a Super Cup. Toulouse were the opponents and after a shocking first half display, we turned on the style after half time to score five goals, young Serge Nsiala scoring four of them with Kasongo nabbing the other. 5-0, one trophy in the bag!

The Coupe de la Ligue was over as quickly as it begun, going out on penalties to Nantes in one of those games that really frustrated the hell out of me.

We had more success in the French Cup however. A 117th minute goal from Rubén Martinez saw us past St Etienne in the 9th round. 2-0 victories over Lyon and Nancy in the 10th and 11th round put us into the quarter final against Bordeaux. Our two big signings, Barone and Martinez, saw them off 2-1. A tough semi final was setup against PSG. Things were going a bit iffy in the league at the time, so I decided to field a strong team. Martinez opened the scoring with an early penalty. Former Auxerre player Yannick Dabo equalised in the 52nd minute before Jeanvier scored two late goals to put us into the final.

The last game of the season was the cup final. Sedan were to be my opponents and they had knocked out Rennais and Marseille along the way. It wasn’t an easy game in the slightest, they defended valiantly and in the end, one goal separated us. A goalkeeping blunder in the 81st minute left an open goal for 17 year old Mxolisi M’Madi to tap in from less than a yard out. A horrible way for them to lose, but I wasn’t caring. French Cup winners 2025!

This year, we were drawn in with Arsenal, Napoli and Red Bull Salzburg. Again, we started against Arsenal, but it was 0-0 this time. We finished top of the group without being defeated, drawing and winning against every team and only conceding two goals. Again, Arsenal slipped out in third spot with Napoli finishing second.

No Dortmund this time round. Schalke were to be our opponents. A team I’d managed on the last two version of the game. They’ve got a very strong squad and it was never an even contest, especially with our form at the time. Early goals in both games did the damage as we couldn’t get ourselves back into it. We lost both games 2-1 and that was our Champions League experience over for another season.

To say I was hacked off with our league form was an understatement. We weren’t bad, we just weren’t very clinical. In 38 games, we score three goals or more on only five occasions. It meant we were very nervy in a lot of games where we dominated play, but couldn’t score. We only managed 55 goals this season, our lowest total in the league. Very disappointing indeed.

It meant I got bloody impatient and angry. I had a lot of crappy draws and some crappier defeats. Draws were to be our downfall over the season, despite winning against Monaco, PSG and Lyon. Nine draws and five defeats doesn’t sound that bad really, but it resulted in a second place finish but only 7 points behind a very dominant PSG. 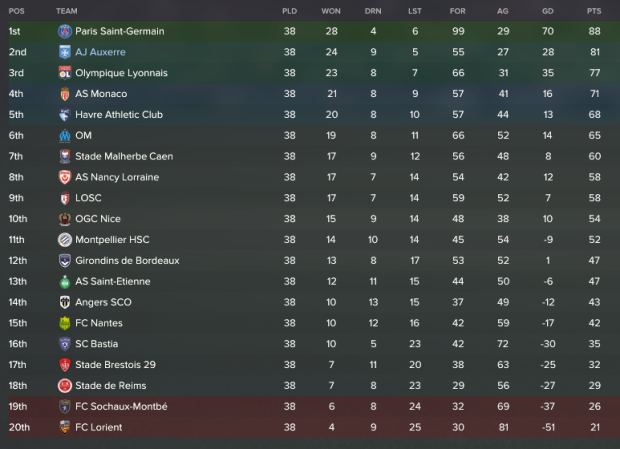 I’d like to say that despite our struggles, some players played amazingly, but there were so many players that just did ok. Jeanvier scored 23 goals, but his average rating of 7.05 from 43(6) games tells you all you need to know. Da Luz only averaging 6.99 from 46(2) is also poor. Roberto Davila was our highest rated player.

Barone did ok, but I’m giving him the benefit of the doubt due to being a new arrival. Martinez had a busy time, racking up 25(3) games, scoring 10 goals and assisting 6, which gives me great hope for him. Radu was solid, getting 21 clean sheets.

The biggest disappointment for me was Serge Nsiala. Scorer of 4 goals in the Super Cup, but riddled with injuries throughout the rest of the season. Not looking good for him

An average season, but we still finished 2nd, I’ll need a big improvement from my players next season though.

So a couple of concerns to address for next season and a couple of likely departures. Da Luz is being chased and with his poor performances this season, a big offer will see him depart. I’m still trying to decide if I’ll keep Nsiala, he’s got potential, but his injuries have ruined any momentum. I’m very excited by the potential of M’Madi so I may allow Jovanovic to move on as well. Defensively, we’re pretty decent. All our issues seem to be in the final third.

We’ll be into the new stadium after the summer which is quite exciting, I’ve never had a new stadium before and hopefully the new facilities can bring in more cash from season tickets and corporate facilities.