I couldn’t think of a title that worked with any of my player names this year, I’ll be sure to sign a player who’s name I can use in a future title!

Anyway, progressing forth with the story. This, our sixth season was to be an important one. I guess they’re all important when you’re playing them, but it was to be our second season in the Champions League and one where I needed improvement in performances after scraping third spot on the final day of last season. We scored well, but defended like chumps. I want clean sheets, dammit.. I want all the clean sheets!

I aimed slightly higher this year and told the squad I wanted a Champions League place, but told the board that I wanted a Europa League place. Got to play it safe just now as we’re still not guaranteed any of the top three places.

I’m still being as vigilant as possible in the transfer market. Our transfer kitty is still on the small side and our wage structure is still restrictive. A couple of this season’s transfers were based on departures that I’d been planning with a view to improve the look of the team.

My first arrival was João Carvalho from Benfica on a free transfer. I’ve no idea why I’ve not heard more about this player from people that play this game as he’s superb. I signed him on FM16 as well. He’s going to play on the right of my midfield and act like a wide creator/inside forward from a deeper position. I opted to sign him over Andrija Zivkovic as I had him on pretty much every FM save I did last year. I obviously had Carvalho too, but he’s a bit different. 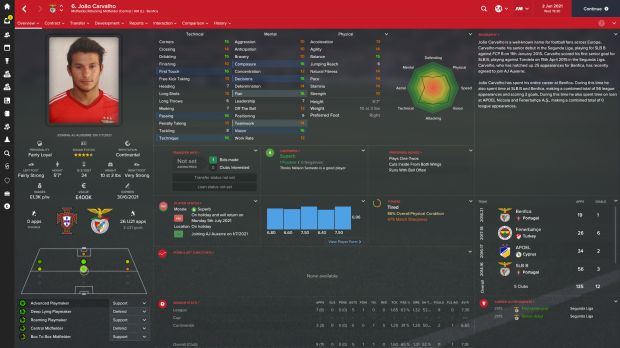 I got really annoyed with the amount of cheap goals we gave away last season. I made the decision to sign a new goalkeeper. I’d looked at Alex Meret when I signed Bardi, but he was out of my price range. A couple of years later, he was still on my shortlist. He was just off the back of a very good season in Serie A, so I was surprised I managed to get him for £6m from Udinese.

I’d also been thinking about getting a better right back in place of Issa Samba. He’s not a bad player, but long term, he’s not going to be good enough. Svensson had been playing well, so I thought I’d go for a younger option that could be tutored by him and be a cup/backup option. My scouts pointed me in the direct of Bartosz Olcha from Wisla Kraków. He’s only 21 but physically, he’s quite developed. For £3m, I was quite happy with this piece of business. There were a couple of other options, but we couldn’t afford the fees that would’ve been required to sign them up.

One of those right backs that we couldn’t sign in the summer, eventually joined in January. Ahmet Öztürk is a young French/Turkish defender who was playing for Galatasaray and I don’t think they were overly keen to sell. £12m was a new club record and probably a bit steep, but for a good quality, young Frenchman (he’s opted to represent France) I can’t complain too much. Hopefully it’s a position I won’t need to strengthen for a few years. 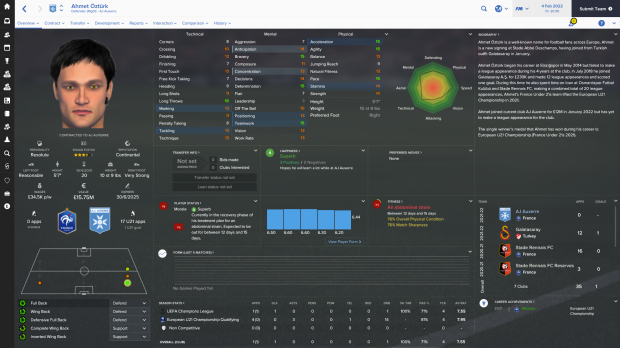 There were a couple of youngsters that also joined, but I’m more likely to mention them in the future should they show signs of reaching their obvious potential. I’m quite excited about Fidiace Ouattara (DM) who I snapped up from Le Mans for £100k and Gaël Schweitzer (LB) who joined from Nancy for £725k.

There were of course departures this season. Francesco Bardi headed to England to join Crystal Palace for £5m. He’d done reasonably well, but the aforementioned cheap goals were enough for me to replace him. £5m was decent for a player who signed for less than £1m.

Adryan had spent the previous season out on loan at FC København. He was now surplus to requirements and I let him join Montpellier. A good player who did rather well for us over the three seasons he spent with us. He joined us for free, so the £5m fee we received was a great bit of business for us.

I mentioned Issa Samba above and explained why he was on his way out. He joined Chievo for £4.6m.

January brought the departures of two players. Juventus came in with a £16m bid for Jonas Svensson that I wasn’t overly keen to accept, but knowing I could get Özturk for £12m due to his release clause, I took the deal and signed the replacement. Baptiste Aloé also headed out in January, he’d been on the transfer list at his own request. Red Bull Salzburg met my £5.5m asking price. Another player who I signed for free and sold on for a good fee.

Our second Champions League campaign started with a Best Placed Playoff tie against Russian giants, Zenit. A tough game I thought, but thanks to Hirving Lozano, we negotiated our way into the group stage with a 4-1 aggregate victory.

Being seeded fourth for the Champions League is the worst. You know you’re up against it before the teams are drawn out. This year, Man Utd, Roma and Wolfsburg. Excellent! We got off to a great start, beating Wolfsburg 3-1 at home. Two defeats followed before we stunned Roma in Rome with a stunning 4-0 victory. Wolfsburg beat us 1-0 in Germany which meant to qualify for the knockout stage, I had to beat Man Utd. Mourinho was talking himself up like the ass he is. We’d not beat them in three attempts, so we were going to have to do something special to beat them. Something special was what we were good at at that point of the season. Paolo Sabak scored a lovely goal in the 82nd minute to hand us a victory of United and into the Knockout Round for the the first time.

It was never going to be an easy tie, but Dortmund were probably as tough as they come. Over the two legs, we weren’t totally outclassed but we weren’t really in with much of a chance of winning. They beat us 2-0 in France and scoring a late goal back in Germany to win 2-1. I was happy with reaching that stage though and the financial rewards were great. I never made it past this stage on FM16.

This is where we’ve had the bulk of our success so far, lifting both the Coupe de la Ligue and the French Cup. Due to our French Cup success last season, we kicked off the season with the Trophée des Champions (Super Cup/Community Shield) against PSG. We didn’t concede against them.. but we didn’t score either. It went to penalties and as we’re dirt at penalties, we lost. The winless run against PSG continues.

Again I was sticking to my idea of playing the youngsters/squad players in the cups.

The French Cup was ours to defend this year. We started our defence against Stade de Reims in the 9th round with a 2-0 victory. An extra time goal against Angers in the 10th round saw us through 2-1. The 11th round is where it ended in the most annoying fashion. A 90th minute goal sending us out at the hands of Montpellier, 2-1.

We had to come back from 1-0 to get by FC Lorient in the Coupe de la Ligue 4th round. We also left it late in the Quarter Final scoring two goals in the last ten minutes to win 3-2. That set up a Semi-Final tie at home to PSG.

PSG, our old enemies. By this point in the season, we’d already drawn with them in the league and only lost to them on penalties in the Super Cup. I kept my young team, big opposition experience. A loss won’t do them any harm and if we go out of the cup, no big deal. After 29minutes we were 1-0. Ah well, we held them off for 29minutes. I thought about a substitution at half time, but decided against it, lets just let the young boys play the full game, give the regulars a proper break. Then we scored, Kasongo nabbed one in the 53rd minute and PSG were looking flat. Our youngsters are giving them a run for their money.. GOAL! Sissako grabs a second and I literally started screaming at my computer. haha. FINALLY! We’ve beaten PSG… FINALLY!

Talking of Finals, we had one of them coming up. Marseille were to be the opponents. I suppose you could call if the Lozano final as he started the game due to an injury. He opened the scoring after just 18seconds, latching onto a comical goalkeeper error. A 67th minute strike from young Anis Nefzi made it 2-0. We were on our way to another cup. Then a sloppy backpass from Marchetti had Rajkovic rooted to the spot, Lozano was in one-on-one and he was never going to miss on this kind of form. 3-0, cup in the bag. Marseille grabbed a consolation 3minutes later, but there we have it, a third cup secured.

Things Started horribly in the Ligue. A 3-0 defeat to Monaco on opening day gave me fright. We picked ourselves up very well though and only conceded 4 goals in the next 15 games. Lorient remain to be our bogey team as they beat us twice this season, both games finishing 2-0.

We finally managed to beat Lyon as well, 1-0 away and 5-0 at home. Woo! Both games against PSG ended even. We did well enough to get a victory in one game, but at least we didn’t lose!

I don’t really know what happened, tiredness or teams figuring us out, but towards the end of the season, we just couldn’t defend. By Christmas we had twelve clean sheets and we only managed six after that. We were defensive monsters in the early stages. Our inability to score and defend cost us in our last six games, losing two, drawing three and winning one. The goals we conceded in those games were ridiculous. I don’t know how else I could describe them.

All things considered, finishing 2nd was great, but it was ultimately frustrating as we couldn’t at least run PSG a bit closer in the last few games.

Our new signings settled in rather well, especially Carvalho. What a man! By far our most creative player over the season and to think, he cost me nothing! Lozano ended up as our top scorer from left midfield, who needs a striker to score 20 goals when your left mid can do it eh?

The big worry is obviously that many of these players are now wanted by big clubs. It’s going to be a struggle to keep hold of them and I have to be careful not to end up in a situation where we’re not competitive if we do lose some.

A successful season again on all fronts. Disappointed with the way the league campaign ended up, but the start was superb. Just got to make sure we have enough in the tank to keep the fight up next season.