Entering the our third season of Ligue 1 football was exciting for us. We’d had very respectable finishes since being promoted and we were boosted by winning the Coupe de la Ligue last season, which meant we were in the Europa League. I set the boys the challenge of finishing in the top half of the table this season. I didn’t want to get over excited and aim higher than that, but I think it’s best to under promise and over deliver when it comes to things like this.

The squad needed a bit of work this year. Not an overhaul, we couldn’t afford that, but just a couple of key signings in areas that would strengthen the team. We had a budget of £3m which could be supplemented by moving players on.

Boto wasn’t happy with his amount of game time with the young Thiebaut taking on first team duties. Youssef said that I broke a promise that I allegedly made, but I couldn’t find any note of a promise. I decided to cash in and move him on. Diallo and Konate weren’t going to get any game time this year as I had another youngster called Anis Nefzi that I planned to bring into the first team and give game time to. A nice little pot of money was earned to boost the coffers a wee bit.

Two centre backs were on my shopping list as well as someone who could play on the right hand side of midfield and cut in and act like a deeper inside forward. By chance, I happened to stumble upon Dorin Rotariu. He was being tracked by Everton, which I thought meant I had little chance of getting him on board. However, after a £2.2m bid was accepted and terms were discussed, he decided that Auxerre was the next stop in his career and I was delighted. Part of me wonders if it’s partly because he already spoke French, so it would be a smoother transition for him?

Arriving at the same time was my first young African signing. Sofiane Loucif had come highly rated by my scouting team after a good season at ES Sétif in Algeria. He had a buyout clause of £925k, which I met. Terms were agreed and I was a very happy man. Looks like he’s got great potential and his attributes for an 18 year old are great. He’ll get game time, but I suspect it’ll mainly be in the cups and as a rotation option. Very happy with my scouting team for finding this young lad and I’m delighted to take advantage of having the extra African leagues loaded. 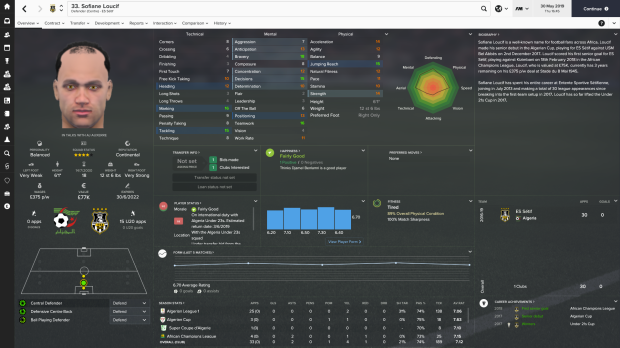 My final signing was another central defender. Maurício arrived for a record breaking fee of £5.75m from Marítimo in Portugal. It was a toss up between him or Sparagna who was with us on loan in the first season, but Marseille wanted too much money.

That was all the business I did, I’ve tried to stay clear of the January transfer window and not panic buy. If I need any extra players throughout the season, I’ll normally supplement the first team with players from the U19’s.

I think it’s fair to say that our first foray into European competition was a bit of a disaster. We negotiated two qualifiers against Antwerp (4-0 agg.) and Rosenborg (9-5 agg. mad!) and were put into a group alongside Tottenham, PAOK and Maccabi Tel-Aviv. A couple of winnable games I thought. Even with the young players I intended to use in the competition, I expected to finish third. Well, I was wrong. We got our ass handed to us and finished bottom with only two points to our name. Tottenham spanked us in London 5-1. The other games were a bit more respectable, but alas, we were out. A good run of games for the youngsters and some vital experience. I’m sure they’ll be all the better for it.

This is where we had most success last season, winning the Coupe de la Ligue and making the Quarter Final of the French Cup. No repeat this season though. PSG knocked us out in the Coupe Semi Final, 3-0 and Le Havre hammered us 4-1 to send us crashing out of the French Cup in the 10th Round. It’s ok, I was concentrating on the League anyway.

I suppose you could say that this was where the magic happened. Yes, we still lost to PSG and Lyon, but apart from that, we were pretty bloody great. We were consistent, we scored a lot of goals, we defended well, our away record was much better, we had the second best home record in the league.

The team clicked really well this season and the signings I made fitted in brilliantly. We ended the season in third place. Quite emphatically in third place actually and finished only four points behind second place Lyon. I was delighted with the progress we made this year and what Champions League football meant for the club going forward.

I’ll not do a full breakdown of results as that’s a bit long and ‘boring’ for some folk. If I were to pick out one game of the season for us, it was actually the away game at Lyon. We were 2-0 up thanks to goals from Paolo Sabak and Florian Ayé. I was bloody excited, finally I thought… not a defeat to Lyon!

But then Lacazette scored in the 71st minute and I got twitchy. Lets stifle these bastards! Then in the 73rd minute, another Lacazette goal. 2-2. Fuck, fuck, fuck. Still, a draw is still great! 79th minute… I used to really like Lacazette. 3-2. I cried myself to sleep that night. No kidding.

Great season overall though. I can’t be upset at finishing third behind the two best teams in France and finishing comfortably ahead of the rest.

I still intend to do a bit more in depth about my youth players at some point in the future, that will likely come once I’ve blooded more into the first team and they’ve developed a bit. We got a couple of good prospects through this year, it wasn’t as good as an intake as previous years, but I’m still happy with what we’ve got. Quality over quantity I’d say.

What can I say about my team that the above results don’t already say? Surprisingly, a lot actually.

Florian Ayé was a machine in front of goal this year. 30 goals in 40(3) appearances for someone so young is great. His contribution to play was excellent, making the most key passes and his laying on 7 assists for his team mates.

Adryan was on fire with 14 assists from central midfield. Gonzales managed 10 assists, although most of them game in the cup competitions. Rotariu scored 7 and assisted 5. Not a great assist return, but not terrible. Sabak’s 9 goals from left midfield were greatly appreciated.

We blooded several youngsters and continued working with the ones already in the team. Thiebaut and Lamy were well established in the first team as both made well over 30 appearances each, despite both only being 18 years old. There was plenty of game time for Loucif, Despres and Nefzi. Muller and Bouillot also got some first team games under their belt too.

When I take into consideration the average age of this team, we did fantastically well. I’m sure there’s plenty more to come from a lot of them, although I suspect keeping hold of them all will be the biggest challenge, especially Sebastien Lamy who is the jewel in the crown.

That’s us for another year. A great season and lots of youngsters in the first team. Champions League football is coming to Stade Abbé Descamps next season, that will be a big, big challenge for us.