During the course of this save, the goal is to end up being a self-sufficient club that promotes players from within before looking to the transfer market. That won’t always be possible, some players won’t be good enough for the club, some players will still need a lot of development before they’re ready to be a first team player and some might end up being sold.

To make sure players are developing as early as possible, I’ll be focusing on their training as soon as they join. I’ve left myself in charge of all youth training. On FM16, I had a lot of great youth players, but I was pretty lazy about coaching them and most of the time, I left that up to my Head Of Youth Development until they reached the first team. I’m hoping my early interaction will benefit me long term.

Everyone loves a plan, right? Well, I certainly do when it comes to my FM saves. I’ve drawn out a rough plan of what I want to do and my reasons my thoughts.

I’ll start by doing a big shout out to Cleon, Rashidi and Guido who have all provided great information about training and player development in their various series/blogs/Youtube channels/forum posts, be sure to check them all out.

So what am I going to be doing for my training setup? Well, I’m going to be focusing on three areas of General training. Why three? Well, it takes three months for attributes to stick with training andI want to try and train as many relevant areas as possible over the course of the season. 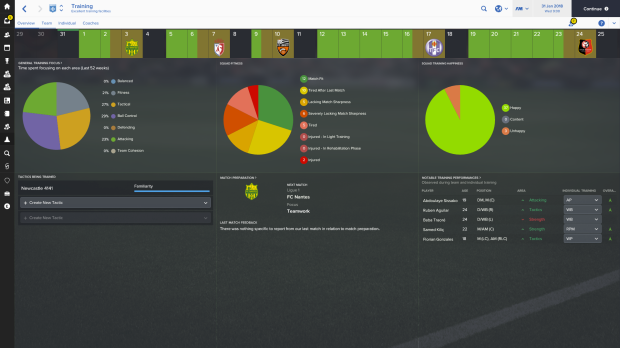 My current training setup works in the following way. Dates are approx.

Now, it could technically be argued that the season doesn’t run until May 31st, but it’s the easiest way to keep things simple. I’m not going to change my training on August/November/February 21st to get full months as I’ll end up forgetting. This is how it’s working, sometimes they’ll get a couple of extra days on a certain focus due to the month not starting on a Sunday, other months they’ll get a little less.

I’m putting an emphasis on tactical, attacking and ball control training as I think these three give the best spread of attributes that I like my players to have. Perhaps I could substitute fitness in for one of them to try and boost their physical attributes, especially in the younger players. On the whole, I like my players to be competent all round, intelligent footballers. It doesn’t happen over night, you’ve got to be patient to see results, but it can work well. All three teams will train the same way. 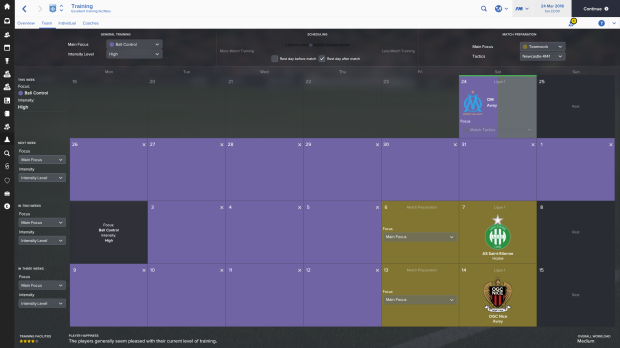 You’ll note that I’ve set the Intensity Level to High. People get really worried about their training causing injuries when they set the intensity higher than average. The thing I look out for is the Overall Workload which is down the bottom right of the screen. I always make sure this is around medium. My Match Preparation varies, at the moment Teamwork is working fine for me. In pre-season/early part of the season, I leave this on Match Tactics as it will help get the team familiar with your tactical setup. My current “Newcastle 4141” is a tactic I made on Beta and have adjusted for Auxerre although at time of writing, this has changed to a different 4141 setup.

There’s nothing complicated about training and I’m not doing anything fancy. It’s just how I like to do it based on what I’ve learnt from others. Changing your Main Focus training every week won’t really benefit your team. If you want to focus on something for the match at the weekend, that’s where you use Match Preparation. It will give you a small/short term boost in areas affected by your chosen focus.

I’m not really sure what other people find works best for Individual Training. I’ve always just worked on a single role and hoped for the best. I used to always use the role that they played, but as I’ve played more, I’ve altered that slightly. I like my players to be a bit more than just a winger, or just a goalscorer. I want them to be able to do as much as possible with their abilities. 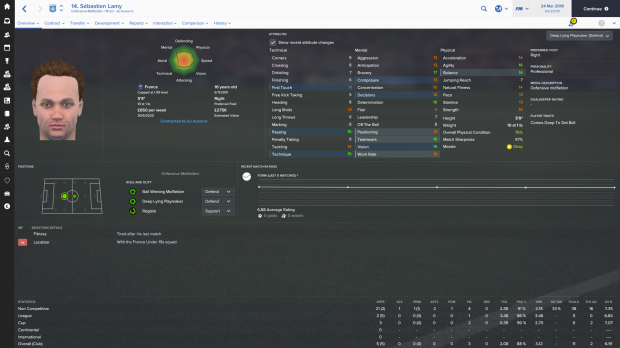 Sébastien Lamy will mainly appear in the team as a Deep Lying Playmaker with a Defend duty. The role requires the highlighted attributes, blue highlights being primary attributes and the grey highlights being secondary attributes. I could just train him on that role and leave him to it, but I wouldn’t be spreading his focus very wide and he might end up as a pretty one dimensional player. Sometimes he might not play as a DLP/D in the defensive role, maybe I’ll need him to fill in at right midfield due to an injury crisis or a red card. I won’t be training him for a wide role, but if he’s a better player, he’ll be able to fill in and do a job without it being a total shock to the system for him.

So how is he training? 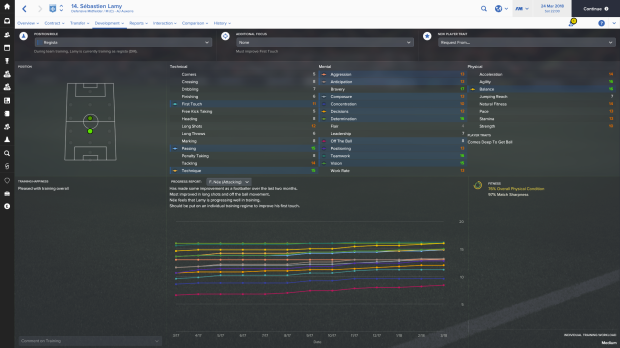 I decided to go for a Regista. If you look at the spread of those attributes compared to the Deep Lying Playmaker, he’ll become an all round better player. Ok, he might not get up to 18 concentration, but all improvements are good improvements. I want to spread the potential ability gains around.

Some people like to focus on one or two attributes, but I find this works very well for me. I know that Cleon had great success for example by focusing on individual attributes and a player role, but I’ve never managed to get that to work for me. I’ll need to revisit that at some point in the future though as perhaps I wasn’t working on it for long enough.

I do this with all players, especially the younger ones. As players get older and better all rounders, I’ll not select a role with such a broad spread of attributes, instead focusing more on their role or a role similar to the one they play.

Lamy isn’t the only player I’ve done this for. I picked out Florian Ayé at the start of the save as one to watch. I’m nearing the end of the second season as I write this and I’m finally seeing the benefits of his hard work. He’s flagged in game as a Target Man. I’ve used him as a Deep Lying Forward, a False 9 and a Complete Forward at various times. My plan was to have him able to operate as a Complete Forward. The attribute spread for that role is large, but I felt with work, he could achieve that. Below I’ve posted before and after pictures from two years of training and game time. 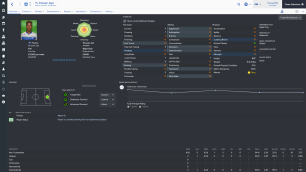 Some of that growth would have happened regardless of my training setup as he’s bound to get better with game time. I might end up switching him to a training role that focuses more on being a goalscorer at some point, but he’s doing quite well in that regard at the moment. He’s not setting the world alight, but recently, he’s been playing much better.

I’ve not got a lot of players who can tutor my youngsters, but the ones I do have, have been very busy. Going back to Florian Ayé, he had a Balanced personality. Very middle of the road. I had him tutored by Gaëtan Courtet, who has a Spirited personality. When tutoring, you won’t always get a like-for-like personality transfer. It doesn’t happen like that for various reasons. For example, perhaps the Tutee has a considerably low professionalism level and tutoring may only bring it up so high. Something like that has obviously happened with the Courtet/Ayé tutoring as Ayé now has a Resolute personality. That is perfectly fine with me as it’s still a very positive change.

Positive personalities are what you want for players to reach their potential and work hard in training. Your coaches will sometimes suggest you have young players be tutored by senior players because they have a similar personality. Ignore that unless it’s making a positive change. Tutoring a Balanced personality with another Balanced personality really doesn’t make much sense unless you are just using the option to pass on PPM’s.

You might have a player in your Youth Intake that has great potential, but a poor personality type. Have them tutored by a senior player. There are two tutoring options.

The big issue I tend to run into is that I tend to keep my squad quite young. I’ll be keeping an eye out for the right kind of tutors on this save as I feel the positive influence will really help my players grow.

At this stage as I’m chopping and changing tactics, I’ve not put too much thought into PPM’s. It’s something I will put a bit more emphasis on this year though as when I have trained players with them in the past, it has been the icing on the cake. I’ve got a few PPM’s that I like from certain roles and some that I really dislike in general. I’ll review this in the future.

I’ll be checking back with some of my younger players progress as the save moves forward. I’m hoping that this training setup will work well for me help the players reach their potential.