We got ahead of ourselves massively last season, I don’t know if we’re ready for this, but we’re here now, may as well suck it up and get on with the hard work. I said I’d play slower this year. I am, I promise I am. I only played two matches the whole of Saturday!

Our first problem is that we’ve got no money. I mean seriously, we were £3m in debt as our attendances are low and Ligue 2 isn’t exactly a big grossing league. Even promotion didn’t bring in the sort of finances that would bring us back into the black. I had no option but to buyout the release clause I’d previously agreed with Southampton for Lamine Fomba and a prior deal with Rennais for Paul-Georges Ntep. It took in Just over £2m.

The board weren’t going to be kind with the money for new players. I don’t suppose they could be really. We were still in debt, but they plumped up with this mega budget.

Thankfully, we weren’t spending a lot on wages so I was able to give myself a budget of around £1m. Not a lot to work with there. I got an email a couple of days later telling me that we’d get £10m over the course of the season for TV rights. I could do with that money up front, but such is life. So, with my £1m budget, I set to work.

This was probably going to be my hardest window on FM, but it was a challenge I threw myself into. Three first team players were to leave/retire at the end of the season.

The most important one was to be captain, Lionel Mathis. I had sufficient cover in central midfield and with Sébastien Lamy only a matter of months away from being available for the first team, I decided not to spend money in this position.

The other two retirees left a big gap at the back. Mickaël Tacalfred and Rémi Fournier weren’t my first choices, but they offered considerable experience. They were old though and it made little sense to renew their contracts mid season. I also lost Stéphane Sparagna who returned to Marseille from his loan spell with us. So that left us with one experienced central defender.

I needed at least two centre backs and someone for right midfield. A striker and a central midfielder would be a bonus, but that would be a stretch for £1m plus wages.

My first signing was Unai Bilbao from Athletic Bilbao for free. He’s a strapping young lad who’s great in the air and can read the game pretty well. The wages were a bit steep, but I suppose that happens when you don’t pay a fee. I tied this deal up at the start of June but he didn’t join until his contract ended. 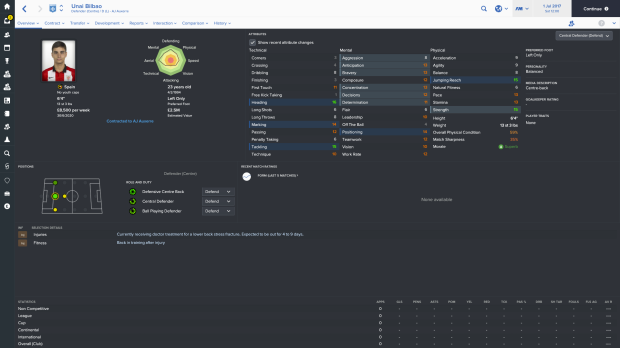 My hunt for a central defender continued and scouting missions to various far flung parts of Africa had begun. As I waited on some reports coming back, my attention was turned towards midfielder Omer Atzili of Granada. He was on the transfer list for £400k. Looking at the attributes he offered, it was a no brainer. I know I needed centre backs, but this guy looked great. A deal was drawn up and the rest is history. His shoots from distance PPM is a drawback, but if I can get him to focus on his playmaking, then I’ve got myself a bargain. 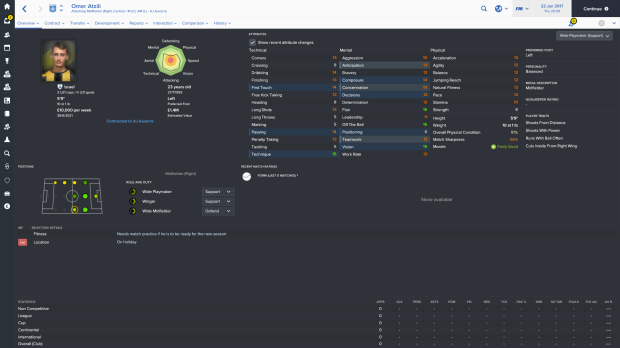 A centre back? Nope. A central midfielder. I had a few injuries in pre-season so I took the decision to get myself someone in on loan. As luck would have it, Lamine Fomba, who we sold to Southampton last season, was available. He looked good and knew the club. Done deal. 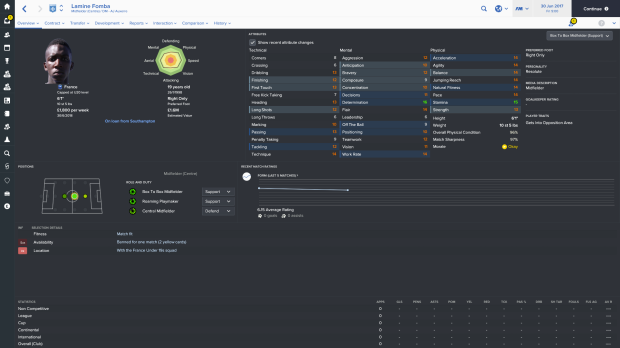 A centre back? Ok, this time I’ve got one. After scouring the transfer market and free transfers, I came up trumps with Baptiste Aloé. French, young, handsome, and some decent attributes. More importantly, Free. Not quite sure why Marseille let him go, but I’m not complaining. 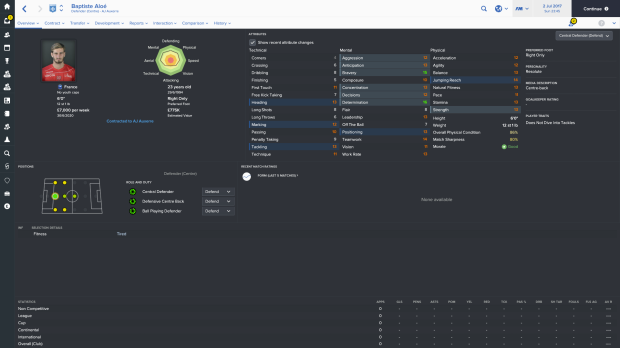 Very happy with my transfer business. Unfortunately, I couldn’t stretch to bringing in a striker. I couldn’t even find anybody available on loan that would’ve made a difference. Surprisingly, I didn’t have teams sniffing around any of my players. There was interest, but no bids were made. I’m very thankful for that actually. Our financial situation meant that the board reduced the percentage we’d earn from transfers down to 20%.

Somehow, despite our financial woes, there was some progress off the field. The club had agreed to make a couple of facility upgrades that pushed us on towards our goal of being a talent factory.

These weren’t agreed in pre-season, but were done not long after. Great improvements for the club. Fingers crossed they go as planned.

I also managed to bring in two new members of staff, one of whom is a big name in Italian football, Antonio Di Natale. He’ll be working with the first team on their technical abilities.

Although the financial situation of the club isn’t great, I’m confident that over the course of the season that’ll come good and we’ll not be in total financial meltdown come the summer. There is a good chance that I’ll have to let one of my better players go in the future though.

The goal will ultimately be to stay up. The board have tasked me with avoiding automatic relegation, so anything above 18th is good for us. I’m pretty confident we’ll avoid relegation. I’m aiming for mid-table. Anywhere around 12th would be a great season I think.

The young players we’ve got at the club have really been growing since I’ve been here and the development of the like of Ayé and Sissako have been brilliant. Not world stars, but certainly good enough to keep us in Ligue 1.

I’m still rocking the good old 4141. I’m going to go with the same system we ended the Ligue 2 campaign with as it proved rather successful. Playing Standard mentality slowed things down a bit and we actually broke through opposition barriers. We’ll see how it goes with the step up in division.

I suspect goals will be our main problem this coming season, Ayé is good, but he’s more of a link man and Courtet has been a major frustration for me. I’ve had to start the season with the same two strikers. I’m hoping to upgrade next summer or bring through a youth player to offer something different. At present, both strikers are very similar.

Atzili is hopefully going to open some doors with his vision and flair. He’s a totally different option to what we had on the right last season. He’s not the quickest, but his attributes are likely to make him an important player.

If we can keep it tight at the back as often as possible, that’ll really help us stay up. Clean sheets give us the best chance of survival. I suspect they’ll be like gold dust since we’re the new boys in the league. The 4141 is very good defensively, so I’m hoping that’ll be the case again this year.

So there we have it, Ligue 1 on the horizon, a big season ahead!