Technically, it’s actually my third season here, but I’m only counting the full seasons as it keeps things simple. I’ve been a bit distracted by other things lately, including the post about my target man, so I’ve not managed to get this post written as the season ended. I’m already halfway through the third season of play, so I’m delving into the past!

Looking back at the first full season, we did really well, finishing in sixth place. We nabbed it at the end, but it’s a great placing for Villa. I’m aiming to be there or thereabouts this season. With the addition of Europa League football, then fixture congestion could be a problem.

We’ve strengthened the squad this year bringing in powerful players that will add to our style and signing a better quality goalkeeper that should be here for the long haul.

We had another good season in the League, we perhaps lacked a cutting edge at times. Our failure to kill off games was telling as we switched off and lost points from winning positions on many occasions.

The Premier League campaign kicked off with a 2-1 victory over Stoke. I followed that up with consecutive 3-0 defeats to Bournemouth and Man City.

Things picked up for us though, beating title holders Tottenham 2-1 and Liverpool 3-1. We had some really good results over the course of the season. We managed to do the double over Tottenham and Liverpool as we defeated them in the return fixtures 3-1 and 1-0. 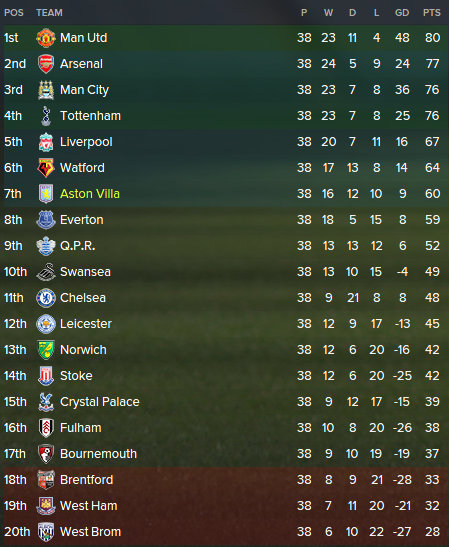 We finished in 7th place this season, which was one place lower than last year. However, we did manage a higher points total this season. We qualified for the Europa League again thanks to teams above us making both cup finals.

A shocking season for Chelsea as they finished in 11th place drawing 21 games. They’ve taken my title as king of the draw. They were in the bottom three for a large part of the season and I thought it would have been a very interesting team to take control of had they gone down. Allegri came in and saved their bacon though.

To my surprise, we went straight into the group stage of the Europa League. I wasn’t complaining. A group consisting of AA Gent, Djugårdens IF and Shakhtar awaited me. It went better than I expected as we finished top of the group on 11 points, we did pick up a very disappointing 6-2 spanking from Shakhtar along the way.

In the knockout stage we were paired up with AC Milan, with the first leg at the San Siro. We were 2-0 up after 40 minutes thanks to goals from Danny Ings(26) and Andre Green(40) but in the 41st minute, Green went mental and got sent off. Nice one! Milan struck back with a goal in each half to level the tie up. We did have two away goals, but I was livid that Green got a red and we’d conceded so easily. Still, with only 34% possession, we did well.

We needed to be smart in the second leg. We could play for the 0-0 and go through on away goals, but I didn’t think Milan would go for that. By half-time, that was evident as they were 2-0 up. We needed to get our shit together. It was one of the rare times that I gave a team talk, aggressive tone required.

15minutes later, we had a goal from Kristoffer Ajer. We needed two more to win the tie though. The boys were looking tired and I made three changes. 10minutes on, we had an equaliser through youngster Rudolph Bernard, in only his second game.

Time was ticking down as we were launching wave after wave of attack, but nothing got through. Extra-time was on the cards. With all subs used, I had played my hand. 9minutes in and there was a goal. Mbappé scored to make it 3-2 to us. Just a few minutes later Jordan Ayew scored another and then Bernard grabbed his second to finish the game 5-2. Could’ve done it in normal time boys? A great comeback!

Valencia were the next team in our path. The first game took place at Villa Park. Mamhoud Dahoud scoring the decisive goal in a 1-0 victory. Hold on… we could be onto something here. Valencia had won this competition just a couple of years ago. Knocking out Milan was a great achievement, but if we could reach quarter final, that would be amazing.

The second leg was a nervy affair at the Mestalla. We didn’t really get going though. Just after half time, Feghouli put Valencia 1-0 up. Decision time again, play it cool, or chase the goal? I held for a few minutes before switching it up to attacking mentality. We could barely get out of our own half as Valencia put the pressure on.

As the clock ticked down, I thought about extra-time.

The Carling Cup is one that I really don’t like. I still don’t see the point in the competition. Alas, I didn’t take much interest in it and Man Utd drop-kicked us out in the 4th round.

I took a bit more interest in the FA Cup this year though as I thought a good cup run would be good. It didn’t start off too well, drawing 1-1 with Wycombe before overcoming them 1-0 in the replay. A 2-0 victory over Sheffield United put us through to the fifth round where we smashed Portsmouth 5-1.

Tottenham were to be our next opponents. Having already done the double over them in the league, I was confident of getting one over them in the cup. Twenty minutes in, things were looking good. 2-0 up thanks to a brace from Jordan Ayew. Quarter final, here we come I thought. I thought…

Spurs did one of those great comebacks and I almost knocked Peter Stojanovic’s block off. Four goals they scored after half time… four bloody goals! Argh.

Javier Ontiveros had another great season, grabbing 16 assists and being our most creative player. Danny Ings was top scorer on 19 goals with Ayew taking second spot on 14. There’s been a decent number of goals from around the team with Ontiveros (7), Mbappé (8), Green (5) and Roberts (7) all chipping in.

The new signings did well, Patrick Roberts probably being the pick of the bunch considering I paid nothing for him. Matthija de Ligt had a good season. Renato Gomes was initially signed as a backup option to Wanyama, but as the season progressed, he took his spot in the first team. Lafont did ok in his first season, but I always find it takes a new goalkeeper a while to settle into their new surroundings.

I’ve got a dramatic change of style lined up for next season. I’ve enjoyed the 442, smash it forward style, but I’m wanting something a bit more structured in place for next year. I’ve got some very good technical players in the side that I should be taking advantage of. You can see that teams are already sniffing around my players, so I expect a few departures come summer.

Thanks again for reading.