The transfer business we conducted in the summer gave me a lot of confidence going into the new season. I started with a 4231 as I’ve been feeling that we sat too deep for the past two years. I’ve got a good squad of young players that should be able to work well in this system.

Hopefully we’ll see improved performances again. We have managed to qualify for the Champions League by the skin of our teeth, but we’ve never played impressively.

The season kicks off with this tournament as we have to play a qualifier to get into the group stage. Marseille were our opponents this year, travelling to France for the first leg. It didn’t go terribly, but we came away with a defeat. Losing to a 92nd minute goal was really difficult.

We made up for it in the return leg. A 3-0 victory with goals from Iver Fossum, Steve Mandanda (OG) and a late Marc Stendera strike put us into the group stage again.

The group stage pitted us against Man City, Monaco and Napoli. I wasn’t overly confident of scraping through, but I thought that last year and I managed to top the group. I think I was right to be pessimistic though. Four draws and two defeats saw us finish bottom. It was a pretty dire European adventure. The only victory being that one in qualifying against Marseille. We could’ve qualified if we managed to beat Monaco in the final game, but it wasn’t to be. Very frustrating.

We actually did ok in this tournament this year. We’ve not really taken it seriously the past couple of years. However, with our squad being a bit stronger, we managed to push through to the quarter finals where we lost on penalties to high flying Levante. We were one penalty away from the semi-final where we would have met Barcelona. I’m not too disappointed, but that would’ve been a nice tie to be involved in.

Where do I begin with this nonsense?

Usually in times where I can’t sum up how I feel in words, I let a meme or a gif do it for me. I think this one does it perfectly.

Introducing my feelings on Villarreal season 2017/18.

We actually started out alright. In 10 games, we won six, drew two and lost two. We were massively inconsistent and I think.. know I was to blame. I kept trying to find the magic touch, a little fiddle with tactics here, try this, try that. It was a clusterfuck of bastardised tactical fuck-uppery. Sorry for the swears.

We’d win two, lose two, win three, lose three. Win one, draw one, win one, lose one. Rinse/repeat. As we got towards the end of the season, the players didn’t know if they were coming or going and you could tell.

Defensively, I kept things pretty consistant. It didn’t seem to matter though as they were terribly inconsistent. Jovanovic was an own goal or penalty away from making me punch a baby. Even when I had a pretty structured midfield, we were being broken down very easily. We were good going forward but just had the worst finishing I’ve ever seen from any team I’ve managed. I swear, I could’ve done a better job. Not even an exaggeration.

Anyway, Real Madrid walked the league. Barcelona had an odd season, Atletico even worse. We managed to finish 6th, but I’m still surprised at that. Levante though.. wow, what a season for them. They played amazing and finished in third place. 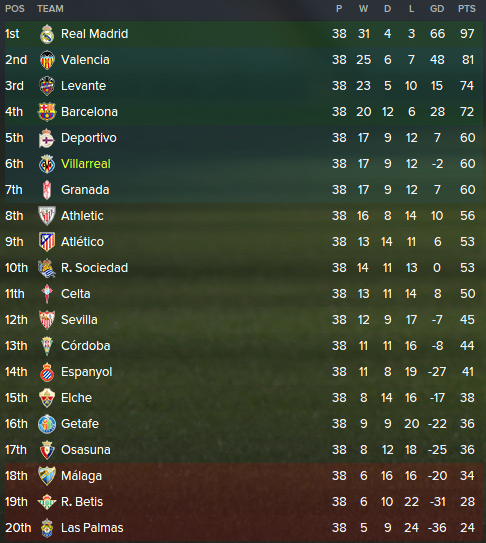 I think that about says everything I need to say. 12 defeats is shocking and I think it’s probably the first time I’ve finished with a negative goal difference tally since I learned more about tactical setups within FM. We only scored 44 goals this year, probably my lowest goals for column in a long time.

As I was getting towards the end of the season, my interest in Villarreal was waning. I haven’t really clicked with the club. I’ve kind of got an idea of how I’d like to move another club forward. My hand has kind of been forced as well as the board haven’t offered me a new contract, so I’m moving on to pastures new.

I’m not disappointed, more frustrated at the football we played. Where did it go wrong? Well, I suppose tactically, we were poor. We didn’t play exciting football. We were poor in attack and defence. We were inconsistent. Games were lost in moments that we should have been better.

Is that a result of my transfer policy? Quite possibly. It’s been an interesting way to conduct transfer business though. I’d maybe try to hold onto players for a little longer in some cases. The likes of Rulli would have helped this season, but that’s just a guess.

Anyway, it’s time to find a new club to carry on with. I did mention at the start of the save that I wasn’t sure this was a long term thing or if I’d move on. I’ll probably try a different transfer approach at my next club and a different style of football. I’ve got a couple of ideas that I’m keen to implement, but I need to find the right club to get it to work… or not, going by my tactical success at Villarreal. Expect an update soon.