I always inevitably go through a big change in the second summer at Liverpool. I have a pretty good idea about who is going to leave and what sort of players I want. I had a couple of targets for each role I wanted to fill. There’s some obvious signings in there, but I’ll get round to explaining my decisions as we go on.

As I mentioned in the first post, the squad is pretty unbalanced and it was my job to fix that as soon as possible. My plan was to get a hard working, intelligent team. I’m sure it’s not an innovative idea, but intelligent players make better choices on the pitch, so I always aim for players with decent decision making. I try to have quick players in attacking and wide positions. All pretty standard, but I want to focus on the type of player I’m trying to sign.

With the style I had in mind, a Liverpool 13/14-esque tactic, I went forward and got to work on the squad.

All of these players left. (Prices do not include clauses) 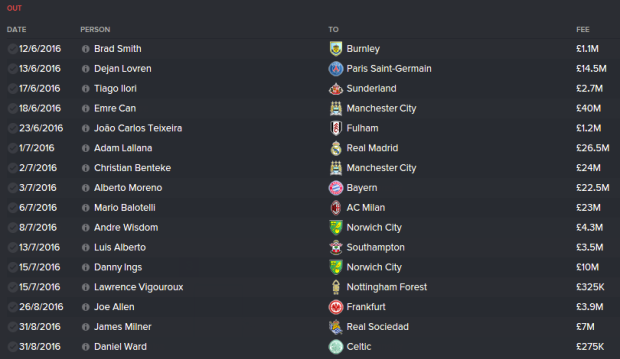 I posted this on Twitter and people were outraged that I sold Moreno, Can, Balotelli, Lallana and Benteke. Look at the money I got for them though? Over £130m for those players. Are they all worth that much? Probably not. Can I sign good/better players for that much money? I believe so. I’m trying not to get too attached to players on this save. It’s a trap we all fall into, so I’m being a bit ruthless.

I don’t think I need to go through the whole list, but I’ll explain the four mentioned above.

Can was the only one I was a bit disappointed about. Man City bid for him last season so I rejected. He got a bit mad and when he settled down, he agreed a new contract, but he locked a £40m clause into it. My hands were tied on that one.

Mario Balotelli had just come back from loan and had 12 months left on his contract. £23m was a deal that I couldn’t turn down. Monaco were also in for him and I thought I could get a bit of a bidding war going, but they weren’t up for it.

I was quite happy to keep Alberto Moreno. He wasn’t the long term left back, but he was going to do for a couple of years. When Bayern came calling, I knew I was going to struggle to keep hold of him. I rejected their first bid and he requested a move. I’m not one to stand in the way of a move, so I got the best deal I could. £22m with a further £3.5m based on appearances.

Adam Lallana wanted to leave last summer. Arsenal offered £34m on deadline day but I had no time to find a suitable replacement. He requested a move, but it was past deadline day by that point. Off to Real Madrid he went and we pocketed £26m.

Despite Christian Benteke scoring goals, he just isn’t my kind of player. He offers something different, but nothing I couldn’t find in another striker. He’s not good enough on the ball in my opinion and he doesn’t fit in with the pacey, high work rate player that I’m searching for. £24m was above his valuation at the time and covered the cost of the striker I wanted to bring in.

I’m sure some people will disagree with me on a couple of players that left, the ones I explained above are the ones that I thought needed most explanation though. There’s a couple of players there that would definitely fit my player profile, but either wanted to leave, or I just wanted them to leave to either bring the wage budget down or bring someone else in.

Making such a change to the squad can be a risk. It’s gone against me quite significantly in the past. I think with the kind of player I’ve been chasing this time, I should be ok. I have a player profile that I want signings to fit, whereas in the past, I’ve just signed players because he’s either had nice hair or he’s got a great reputation.

I tend to always sign young players, so I thought I’d open my mind a little to signing some older ones this time. After doing some searching, I ended up buying young players again.

I’ll be honest and say that some of these players aren’t significantly better than what I had before, but they fit the profile of player I want. Hopefully that will transfer to positive performances on the pitch.

I’m not going to go through them all, but if you look them up, you’ll see that with the exception of Vlasic, they all have pretty good decision making and all of them have a good work rate level. I’m usually aiming for around the 13 or higher mark in these attributes. If they’re younger, I expect that with age, these attributes will develop. Andrija Zivkovic also joined, but isn’t on that list as he was a Bosman signing.

As you can see, I got carried away and spent £69m on Gaya. Signing a left back was getting desperate. Ricardo Rodriguez was my next choice and they wanted £57m for him and he wasn’t as good as Gaya. I figured I was just as well spending the extra £12m and getting the guy I wanted. When you get to that level of spending, you may as well not argue over such small sums haha! I’ve had him on another save in FM16 and he was well worth the cash.

Neves was my next biggest signing. I’ve never signed him on FM16 and with Can off to Man City, Neves seemed like the right choice. It might end up working out better than if I had kept Can. He’s got far better positional sense than Can which can only be a good thing when it comes to the defensive side of our game. I’ll be adding some PPM’s to refine him a bit more.

Despite all these big money transfers, I managed to shave £400,000 a week off my wage bill.

I suspect that next season there will be much less transfer activity. Maybe one or two players coming and going. I’m quite happy with the balance right now. The right side of midfield is my only concern as it’s not quite happening for me just yet due to injuries etc.

With the players that I’ve signed, my squad is a bit closer to how I want it. I’ve focused on a few attributes and really tried to make sure I got players that fitted them. I tend to go for positive personality types as well, which I’ve found/learnt, really helps the player develop.

In my next post, I’ll go into a bit more detail on my second season and we’ll see how the new guys performed.