When the season got underway, I had aimed to finish in the top four. I was mainly using my rotated squad to play in the Copa Del Rey and the Europa League. I wasn’t too fussed about how we did in those competitions.

We grinded out our first couple of wins, but the important thing was getting wins. The new players settled into the system almost instantly and it was clear that in Pacheco, I had a goal machine.

The Copa Del Rey wasn’t important according to the board. I thought it was a good way of giving my second string game time though. They did bloody well too. A couple of players really gave me a selection dilemma towards the latter part of the season. Ochoa did great and could certainly impact a game when coming off the bench. He ended up with 13 goals and 12 assists. We had a pretty decent run in the cup. I used a few of my first teamers in the Athletic game as it was a derby. We made it to the final and managed to sneak the final 1-0 after a cagey match against Las Palmas. Great reward for the reserves.

Real Madrid looked to be walking away with the La Liga. Nobody could score against them, nevermind beat them. They swept me aside in both games 3-0 and 4-2. We were 4-0 down in the second game. At some point, it went a bit wrong for them. In the run up to the 4-2 defeat, I needed to win to leapfrog them. They opened up a gap again and then without realising it, we were top. Five games without a win for them meant it was going to be tough for them to get back into it. They needed us to drop points but we wrapped it up with a 3-0 win in the derby against Athletic, eventually finishing 10 points clear of Real.

We picked up some nice results along the way, 6-0 against Athletic, 5-1 over Atletico and 4-2 over Barca being the highlights. 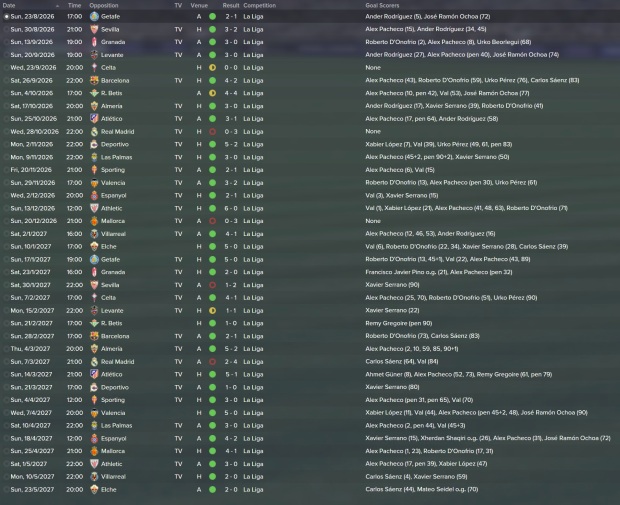 Player performances were also great. Pacheco was a superstar, banging in 47 goals in 47 appearances. My attacking midfield trio also helped themselves to 38 goals between them. Val and Serrano (on loan from Barcelona for another season after this one) also helped out closing down opposing players by averaging over 2 tackles a game each.

In January I signed two new defenders. Tagliavacche, an Italian centre back, cost me £20m from Genoa. Boulanger, a Belgian right back was a £4.5m purchase from Arsenal.

In the Europa League, again where my reserves played, we did very well. A ropey start, but the aim was to only get out of the group stage. We only went on to bloody well win it.

The final was a bit of a faff if I’m honest. I won the game 3-1 originally. I started taking screenshots for this blog and the game crashed. I hadn’t saved. I had to replay the final. It was not as straightforward. We were 1-0 at half time, we missed a penalty in the 43rd minute. Metalist then scored one right after half time, putting us 2-0 down and seemingly, game over. I took Pacheco on right after that goal and he scored two goals, one right at the death, to keep us in the game.

Metalist then went 3-2 up in extra-time, despite having a man sent off. A 113th minute equaliser took the game to penalties. We won the shootout 5-4 and completed a nice little treble.

The first final go lost due to a crash dump. 3-1 in normal time!

Thankfully, we managed to still get the win, even if I did have to go back a few days.

So there we have it, first full season in charge and I’ve swept the board off their feet with our performances. There’s some work to be done in the summer, but I’m not sure if I’m going to be the man to take that on. I’ve not got the same feeling for Sociedad as I did for Schalke and I’m going to keep my eye on the job market in the summer. If not, I’ll be looking at a big tactical overhaul. I’ve already signed two new players, but I’d be looking to shift some on if I do stay.

I noticed today, that I’ve been playing this save since November. I don’t think I’ve ever played a save as long as this.

We’ll see what the summer brings, but for now, adiós!