I’d taken a couple of weeks off of this save for a couple of reasons. I wanted to play the game for fun and I don’t want to make this game get stagnant and boring. I got back to playing this earlier on this week and picked up where I left off. My own goal this year was to retain the League and do as well as possible in the Champions League. This was the first time we’d qualified so I wanted to make an impression on it.

In the summer I made four signings, most of which were wrapped up in January with the idea for them all to join in the summer. I spent £12.5m on players I thought would add to the team and challenge for first team places, with the exception of Chumak who I signed as a youth prospect.

A couple of people might be surprised at my departures. Tariq is one of the wonderkids in the game, but he just wasn’t performing for me no matter what role I used him in. He had a terrible season last year. He was complaining about lack of game time so I sort of lost patience with him. Due to him being a foreign player and with the emergence of Domen Crnigoj, I knew I had excellent cover. £4.5m plus clauses was a decent deal for a severely under-performing player was a decent deal for us.

Sallahi was one of those deals that really took a lot of thinking about to decide if it was right. I got him in cheap and I know that he can develop well, but unless he’s going to be a starter for me, I didn’t see the point of holding onto another foreign player. With the arrival of Sobol, it was only going to push Sallahi further down the line.

Vida was a bit of an easier decision. Was playing back-up to my preferred central pairing of Khacheridi and Kryvtsov. Plenty of teams were interested so I just needed to get an acceptable bit in. Valencia and Everton matched his value and the decision was up to him. Sunny Spain it was. Who could blame him?

I tweaked my tactic again this year after being a bit useless at closing out games. I’ll do a separate post about my tactic as I know people are interested in that type of thing. I’m still playing 4141, the roles haven’t changed much but some of the instructions have.

I came into the season on the back of an impressive unbeaten run. Bizarrely, Football Manager does not see losing on away goals as a defeat nor does it count the Supercup. I was on a 33 match unbeaten streak which stretched back to the 17th of September 2015. I did lose the Supercup on penalties again. Am I ever going to win that competition? It has eluded me every season that I’ve been here!

We had a great start to the season and won 9 out of 9 games in the league. In the Champions League we were handed a tough group with Real Madrid, FC Porto and Feyenoord. This is the third season in a row that I’ve drawn Feyenoord in Europe. We got off to a good start there too. Hammering Feyenoord 5-1 and getting a respectable 0-0 draw with Porto.

Our top scorer from the previous two seasons, Roman Zozulya missed the first two months of the season so I was using Liam Henderson as my main striker. He did well. He’s in the process of changing to play as a striker rather than a midfielder. He grabbed a few goals and assists. Yarmolenko was in good form and Crnigoj was banging them in from midfield.

We had a little slump where we lost three out of four games and this was when I implemented those tactical changes which I think helped our season. Defeats to Dnipro, Real Madrid and Metalist came in quick succession. We managed to come back with a couple of great results, including a 3-1 victory over Real Madrid and another 2-1 defeat of Feyenoord.

By the time the winter break came in, we were looking good on all three fronts. Top of the league, in the Champions League knockout stage and into the quarter final of the Cup. Our first games back after the break were the Champions League ties against Italian Serie A winners, AC Milan. A 3-1 aggregate win put us into the Quarter Finals which was fantastic. I was delighted to get out of the group, so this was a scalp.

We had a couple of average results in the league but were still neck and neck with Dnipro. Shakhtar’s challenge had fallen off rather early and their manager was sacked by the time we played each other in the Cup Quarter Final. We won the first leg 2-0 but the in return leg in Donetsk, we were steamrollered 3-0. We didn’t get a look in.

Real Madrid were my Quarter Final opponents in the Champions League. I was hoping for a respectable result with maybe a home victory, but we were excellent in both games and eventually won 8-1 on aggregate. Their goal coming from the penalty spot.

We overcame Benfica 2-1 on aggregate in the semi-final which setup a showpiece final against Manchester City. 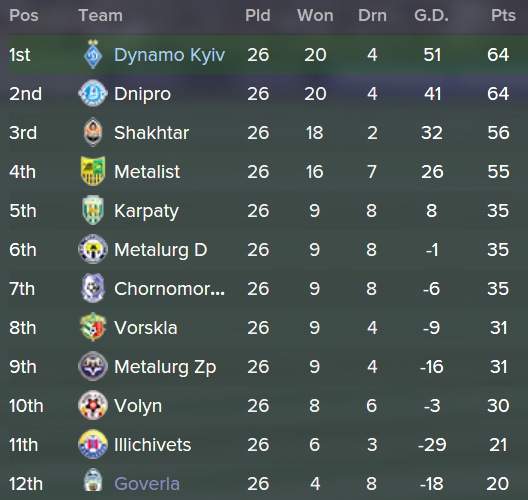 We played far better as a team this season with goals coming from around the team. Zozulya finished as top scorer again with 17 goals. Yarmolenko nabbed 15, Crnigoj 12, Khacheridi got 10 which is great for a centre back. Zivkovic 9, Bliznichenko 8 and Bezus got 7. Only four outfield players didn’t get a goal this season and all of them were defenders.

One of my goals at the start of this Dynamo adventure was to reach the Champions League Final within 5 years. I somehow managed to make it at my first attempt. Beating Real Madrid three times on the way to the final gave me hope that we had a chance of victory.

Man City, now managed by Gerardo Martino, had made a couple of new signings. Javi Martinez and Juan Cuadrado did the business for them. Martinez cleaned up the midfield and Cuadrado did the damage further up by grabbing two goals. We had our chances, but City were too good. I was a bit disappointed, but thinking back, I’d have been more surprised if we had won it.

Overall it was a pretty successful season. Player performances were great and our run in the Champions League was a great success. Tactically we opened teams up and on the whole, we didn’t give much away. Set pieces were our downfall towards the end of the season.

We got a couple of good youth prospects in and I’m hoping that they’ll make it into the first team within the next 2 years. Igor Chumak has been making the transition to play as a right wing back due to his attributes. He played a few games and was really making a lot of progress towards the end of the season. Hopefully he’ll get more games next season as I really feel he offered more in attack than Danilo Silva did.

I can’t see a big change in the squad this summer. Perhaps one or two signings. Possibly a few youth players.

I’m hoping to win the league again next year and get to the Champions League knock out stage again.

Thanks again for reading. I’ll have an explanation of my tactics up within the next couple of days.