I suspect this is going to be a long post, I apologise if I ramble a lot. There’s lot to report, so I’ll get on.

In my last post I mentioned that the board had lightened the pressure on me a bit by stating that I only had to put in a challenge for the title this season. An achievable target I thought.

We only managed three pre-season friendlies due to my lack of knowledge about when the season kicks off, I’ll be sure to avoid such a mistake next time round. It didn’t cost us, but it took a few games for us to get up to full match fitness.

Games come thick and fast in Ukraine, which is surprising as there’s only 26 league games to play. Shakhtar were my first real challenge, a team I’d not beaten in three attempts. I’d scored two goals against them to their seven. I always get nervous before games like these as Shakhtar have a big financial muscle to flex and have some pretty handy players in their squad. They are one of the teams I need to overthrow if I want to assert dominance over the league and create an empire in Ukraine. A draw would definitely have been a great result but we somehow managed to put 5 past them, they came back to 4-2 in the final 10minutes but an 89th minute goal put the game to bed and calmed my now racing pulse. I was ecstatic, but I had to remember we were only two games in. Bezus (I hope it’s pronounced like Jesus) grabbed a hat-trick from midfield.

We got the goals despite Shakhtar having more of the ball

The Superkubok (Supercup) against last seasons League Winners, Dnipro. It was a dull affair ending 0-0 with Dnipro eventually winning on penalties. Moving on…

We played some great football in the first half of the season, we swept teams aside while managing to grab impressive victories against Metalist (3-0), Dnipro (4-0) and Shakhtar (1-0) again. We also knocked Shakhtar out of the cup 5-2(3-0 and 2-2) on aggregate giving us a chance of retaining the trophy we won last season. Our European campaign was also coming along nicely. We were drawn in a tough group with Fenerbahçe, Feyenoord and Celtic. We comfortably won the group only dropping points in both 2-2 draws with Feyenoord. This wasn’t really a competition I was focused on though as I really needed to get Champions League football this season. We had two draws against Braga in the next round with us losing on away goals.

I wanted to be in with a chance of challenging for the title at the halfway stage and I managed to achieve that goal as we were sitting 4 points clear of Shakhtar at the end of November. There was still plenty of games to play, but this was definitely above my expectations, considering I was playing much and such the same starting line up as I had the year before.

My biggest problem last season was my inability to keep clean sheets and to really kill off games. I always blamed our ageing goalkeeper for that and was counting down the days until Maxym Koval returned. He improved us massively I think, he wasn’t exactly exempt from giving me heart stopping moments where I shouted at him, but his mistake count for the season was only 2 with 1 leading to a goal. He did provide me with moments of “what the f*ck?” as well, and I mean that in the most positive of ways. He pulled off an amazing Jerzy Dudek Champions League Final type, double save against Dnipro later in the season which amazed me beyond belief. I must have watched the rebound on every camera from every angle possible and I’m still not sure if it was a goal or not. Could definitely have done with Hawk-Eye there. Reality was that he had relatively little to do as the season progressed, but when called upon, he was very reliable.

Looking at his attributes, bearing in mind that he’s only 23 years old, he has potential to be one of the best goalkeepers in the world in this save. Definitely one to consider if you’re ever in need of a new goalie. He ended the season with 27 clean sheets in all competitions.

The saviour of our backline – Maxym Koval

In winter window, inspired by a recent post by Cleon on his blog over at SI Sports Centre, I signed Liam Henderson from Celtic in the hope of turning him into a Complete Forward. He’s 19 and he needs a little bit of training to get him right for the job, but he has plenty of potential in that role I think, even as a False 9 he could be good. He bagged a few goals in the mid season friendlies and another couple of goals in the league, despite getting an injury which ruled him out for 6 weeks. No other players were brought into the club in January, although I did sign a couple of players who will join me in the summer.

In the first half of the season my striker Zozulya was on fire, scoring 14 in 14 games, his player radar (thanks to Ed over at FM Coffeehouse for helping me out with making sense of this) looks mighty impressive for that stage of the season. Assisting teammates was never his thing. You can read more about these Radar’s over at the Statsbomb website. These are based on “per 90minutes” data. 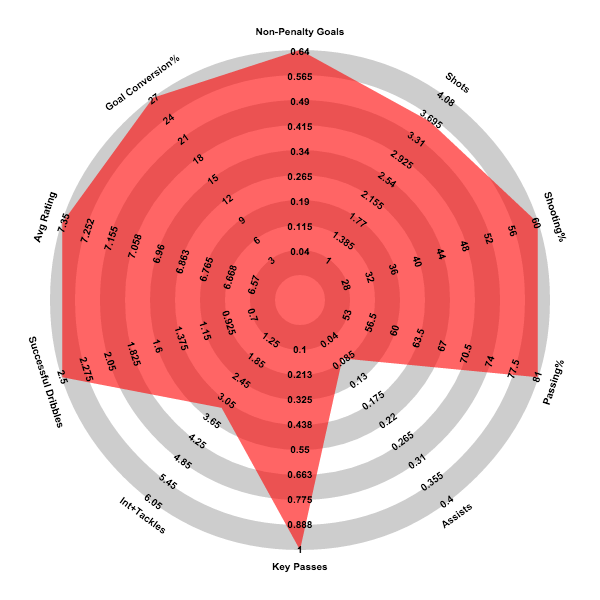 We had a little weird blip in form where we were struggling to break teams down, we finally cracked it with a 4-0 victory but I got a crash dump right after! We managed to win the replayed game 1-0, which was very annoying. What helped us through was that teams couldn’t get near our goal, so even though we were struggling to score, nobody was getting a chance to score against us. In a couple of games we created a lot of CCC’s and hit the woodwork several times, but couldn’t get a comfortable victory. I ended up tinkering which never made the situation any better or worse.

With three games to go, we needed a win and a draw to claim the title after an undefeated streak of 15 games. We managed to draw 1-1 with Vorskla, despite being down to 10 men which sealed the title. Shakhtar lost 2-1 that weekend which made it come in a little earlier than expected. The board was happy, I was happy and I had a beer to celebrate! Woo! Our league form was frighteningly impressive. We were (largely) injury free this season which I think helped us significantly. I still think we lack goals from the middle of the park and it’s something I’m keen to address in the summer, either tactically or with using one of my other players. As you can see, we only conceded 11 goals in 26 games.

The league takes this little break for the quarter/semi/final of the cup to be played before the last game of the season. With the league already taken care of, I put out my cup team as I usually did. We really found our scoring boots in the last couple of cup games as we completed the double. We beat Karpaty 7-1 in the final, it was only 1-0 at half time! Our run to the final was excellent and mainly played by our backups/younger players.

Run to the cup

So there we have it, my first league title on FM15 and my second cup. I only ended one game all season with less goals than the opposition. We were defeated on penalties and the away goals rule in both cup exits. In 43 games, I think that’s incredibly impressive.

I suspect it’s going to be incredibly difficult to repeat this sort of form next season. With the addition of the Champions League, I’m going to be playing teams of a higher level. If I manage to get out of the group, assuming I don’t have to qualify to get there, that would be a great achievement. I want to try my hardest to retain the league with the cup now taking a backseat in things.

On my list of things to do here, I’ve achieved two out of my six objectives. Developing youth is proving difficult, but I’ll get there with a little bit of investment I think. I need to try to keep the solid defensive line that I had this season if I’m to continue making strides forward. I expect Dnipro, who really missed Konoplyanka this season, to improve and I expect a couple of big signings from Shakhtar also.

Thanks again for reading, any/all feedback is most greatly appreciated.