Sometimes when you play a save for a few (in game) years, you grow tired of it. You either get beaten by the challenge or there is no challenge as you sweep everything up and smash everyone along the way. I do get tired of winning from time to time, and I don’t mean that in a big headed way, I obviously have stinkers as well. I’ve been really lucky with how this save has gone.

When I moved to Schalke, I thought I’d keep this job for three years and take over another team. This is the end of my third year and I feel like I’ve still got loads of enthusiasm for the team. I’m actually falling in love with Schalke a little bit and even bought myself a Schalke polo shirt the other day after being put off by the incredibly over priced home strip! I think I have at least another two years at this club, although my contract has three years to run. Assuming nothing hits the fan, I’m here for a while anyway.

Getting stuck into things, it was a bit of a manager merry-go-round again this summer. Dortmund done away with Rafa Benitez after a very poor fifth place finish. I thought they were going to finish mid-table, but managed a little push towards the back end of the season. They were well off the pace though. They appointed former Dynamo Kyiv manager, a man I once sold, Olexandr Shovkovskyi. He’d joined on the back of Kyiv winning the double. It was Dortmund’s third manager in as many years. Bayern Munich had also made a change after sacking Brendan Rodgers. Leonid Slutskiy joined from Benfica. As it would turn out, he’d get the sack after Munich were pumped by yours truly, 172 days in the job. They hired another former Dynamo Kyiv man in Oleg Luzhnyi. Wolfsburg were the only other team to change manager, Slaven Bilic moved to Juventus a week before the season kicked off and Michel rejoined for his second spell in charge.

Everyone was looking to get into those top three Champions League spots. With Dortmund having such a terrible season the year before, it looked to be wide open.

On the transfer front, this year I made a few signings. I splashed £29m on Rainer Linkert who is a young German left back. I’d had my eye on him since I joined Schalke and Wolfsburg wanted crazy money for him. He eventually got unsettled and I got my man. Vladimir Pokorny was another pricey aquisition, £17m for the 20 year old midfielder from PSG. He’s got great attributes and lots of room to grow and become a great player. Fraser Thompson was a no risk buy. £2.2m from Chelsea but he was very highly rated by my scouts. I tried signing him in January and Chelsea wanted £30m for him, I’ve no idea why they dropped their price so low, but I got him for a steal. He fits the profile of player I’m looking for in the attacking third. Young, very fast with good technique and the ability to put the ball in the back of the net. Alen Halilovic is perhaps a surprise signing, even for me. I looked at him, I looked for someone better than him and I couldn’t. His attributes seemed to be exactly what I was looking for. His teamwork lets him down, but at the price quoted, I couldn’t go wrong. £6.75m seemed like a no brainer. Guessoum and Aydin were signings for my U19’s and you’ll hopefully hear more about them in the next couple of seasons.

We moved a couple of players on in the summer as well. Andrew Robertson headed back to Real Madrid after an impressive season with us. We made a £12m profit on him and with me finally getting Linkert, it made sense to try and balance the books a bit. Bernard also left us in the summer. He missed a bit towards the end of the previous season and I wanted someone younger in that AML position, I decided to give Cerny the chance to prove himself, so I sold Bernard to Newcastle where I knew he’d get games and not rot on the bench. Barcelona, Real Madrid, Man Utd and Chelsea were all interested but never put in a solid bid. £16m was great business for us considering I signed him for £6m two years before and he’s now 29. I just looked him up at Newcastle and he’s done really well there, so I’m happy that worked out. As you can see, Vaclav Cerny also moved on in January for £9m. I signed him for free and I wasn’t convinced he could do a job consistently for us. His form was very up and down.

We did a preseason tour of the USA and opened the campaign off with a 5-2 win over Bayern Munich in the Supercup. Draxler and Avdijaj picked up where they left off last season and new boy Halilovic scored on his debut.

The Pokal is a competition we’ve never won and I thought we’d have a go at it this year. Our youngsters were developing a bit and seemed a lot more capable in preseason. With the additions of Thomson and Halilovic, it was a good blend of players for the cup this year. Wehlert (AMR) and Kocabiyik(SC) were making progress and they showed me just how much in the first round game against Linx when they scored five and four goals respectively. 9-0, lower opposition, but very convincing performances from the youngsters. Frankfurt were our second round opponents and we did away with them 3-1 with Wehlert (1) and Kocbiyik (2) getting the goals. The third round is where we’ve gone out in my previous years here, but a 7-0 trouncing of Bielefeld put that demon behind us and we marched on. A penalty shoot-out against Koln was an edgy affair before we put five past Hamburg in the Semi-Final.

I’m fast-forwarding quite a bit as the final was the last game of the season. Stuttgart were the opponents and at half-time, it was 0-0. Draxler had just come back from injury and wasn’t 100%, I took the risk on starting him but it didn’t pay off. After 57minutes, I withdrew him from the game and subbed on 17 year old winger Alen Soljic who’d scored a goal in the semi-final win over Hamburg. It was an inspired move as he single handedly took the game by the scruff of the neck. Just over ten minutes after coming on he’d fired in two goals from close range. Towards the end he’d get an assist for Donis Avdijaj to seal the deal and make it 3-0, the Pokal was ours!

I suspect Soljic scared Suttgart into submission, he looks like a character from Game Of Thrones. Only 17, with that beard.. I’m jealous! He’d spent most of the season in the U19’s team and scored 24 goals for them before I promoted him towards the end of the season when injuries had forced my hand.

After a semi-final appearance in the Champions League last season, I was hoping to go one better this year. Obviously with Schalke not being Champions League regulars, it’s catching us out a wee bit as we’ve been seeded third both years. We were drawn in a group with Man Utd, FC Red Bull Salzburg and AC Milan. We headed to Salzburg for our first game and picked up an impressive 5-0 victory. A 1-1 draw at home to Milan was followed by a double header with Man Utd. We took a game each and rounded off the group with victories over Milan and Salzburg that saw us top the group ahead of United.

The first knockout round drew us against Benfica and we looked down and out after losing 3-0 in the first leg. When we got them back to the Veltins Arena we managed to smash them 7-0 and send us into the quarter-final. PSG were next, they have an amazing team right now with a lot of outstanding youngsters. It was an end to end game and we eventually overcame them 5-4 at home. We weren’t great away from home this season, I thought PSG would come out all guns blazing and they did. Our counter attacking system worked well and two second half goals saw us through 7-4 on aggregate. The semi-final drew us against group opponents Man Utd. They’d changed their manager since the game earlier in the season, they’d offered me the job, and were in a bit of form. At home I knew we’d do well, we did and managed a 5-3 victory. I wasn’t happy with out defending in the Champions League, but as long as we were winning, that’s the main thing. The second leg at Old Trafford would see us eliminated, there’s no other way to put it, but we were abysmal, 4-0 down at half time and that was exactly how it ended. Gutted.

The Bundesliga has been where it was all happening for us the past two seasons. After the departure of Bernard I thought we were struggling on that left hand side. He was a very creative outlet for us and I think we missed him in a few games. On paper, our first game was a toughie, but we managed to put six past Leverkusen without reply. We picked up some good wins but the draws against Freiburg and Hoffenheim were a concern, we looked out of ideas. I was a bit stubborn tactically and I didn’t switch things up too much.

After the victories over Dortmund and Bayern, I had a bit more confidence in the team. I dropped Cerny and decided to utilise Halilovic and Thomson a bit more. It paid off. They were both very creative and could score goals. They were involved in 30 goals each, either scoring or assisting, both managed over 100 key passes each. These were players I’d bought as rotation players who could offer something different.

We ended the year as Winter Champions again with a rejuvinated Dortmund, hot on our heels. When the league restarted we were in the middle of what would become a 13 match winning streak. A victory over Dortmund would win us the league at Signal Iduna Park… I wanted that badly! It wasn’t to be though, a penalty before half time put them one up before we scraped an equaliser back in the 71st minute, a red card soon after put the champagne on ice. Bottom club Frankfurt were next and we put six past them to seal our third title in a row.

It was only with three games left that I realised that we’d not lost in the league yet, I was convinced we’d had a worse start than we did as we were trailing Dortmund in the league at one point, but obviously we weren’t that far behind them. Going into the Nurnberg game I was nervous. Advijaj sealed the victory for us early on though and we finished the season as invincibles. 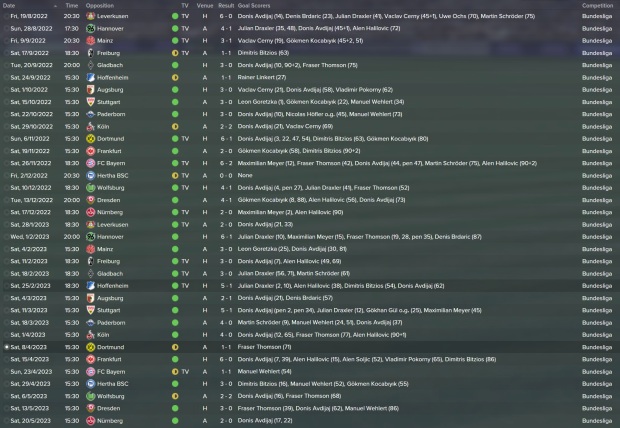 Player performances were very good again this season. Draxler stealing the show with Donis Avdijaj not far behind. Draxler was being closely watched by opposite teams and drifted in and out of games a lot more. He managed to pick up a couple of awards again though. Compared to his last two seasons, it was a bit below par, but still excellent

Avdijaj was outstanding up top and managed 48 goals in all competitions and was joint top Bundesliga scorer with 34. Wonderkid Kocabiyik managed 22 goals, while young winger Manuel Wehlert picked up an excellent 20. Assists were well shared out this year. Thomson and Halilovic were great signings, combined they cost less than £10m.

Just as a side note, my U19’s also had a great season and picked up a league and cup double for the second year running. The future is bright!