After winning the Premier League and Champions League with Arsenal and growing a bit tired with the Premier League in general, I thought I’d move onto something else in this save. I’ve got myself a bit of a reputation now and while I wouldn’t say teams are queuing up for my services, I’ve had some good offers.

The first job offer came from Bayern Munich. It actually came around about March time when they sacked Unai Emery. They went on to win the league and although the team really needed an overhaul, they weren’t really needing my services for a project I’d be interested in. As it would so happen, Brendan Rodgers took the job.

There were some pretty good jobs available this summer. It’s Euro 2020 time so there’s the usual manager merry-go-round that occurs when managers resign/get the sack. I wanted out of England. I’ve done pretty well in France and Italy in previous saves but never ever done great in Germany. I wanted to go there.

Luckily for me, Schalke sacked their manager, so I applied and after a pretty weird interview where they claimed I put Arsenal in debt(we made a £220m profit in my final year), I got the job. They’ve had four managers in the past 5 years and only two of them have lasted for more than 12 months. They’ve done ok in the league in recent times, but Champions League football is really what the club is after, something neither of the previous managers have delivered.

The team was in an ok condition and they’d managed to retain their main stars from the start of the game. Draxler, Meyer, Goretzka and Howedes were all accounted for. There’s also a young ball winning midfielder by the name of Martin Schroder, who is a beast. At the back the team are a little lightweight. Unfortunately, when I arrived, the team were spending £1m a week on wages, which was £500k more than they had budgeted for. Big wage players were immediately targeted. The board had given me a £7m budget but I ate that up with the wage imbalance. I ended up selling a few players on inflated wages that wouldn’t fit in my tactical plan.

Wilfried Bony, Jurgen Locadia and Facundo Ferreyra (who I sold to Schalke in my first season at Arsenal.. he must hate me) were all sold for a combined £30m and £220k a week off my wage bill. I made a few more sales of players that weren’t good enough or I didn’t need them. I did manage to get a little bit of spare change and by pure chance, stumbled upon unhappy Brazilian, Bernard, who I thought would work well in my team. I put in what I thought was a cheeky £6m bid and it was immediately accepted. I thought maybe his wages would hinder my bid, nope.. he came in at budget. He’s not played a lot of football in the past few years but still has plenty of ability and is only 28. I’ve no idea why Chelsea paid as much as they did for him when he played so little at Man City. He comes with a point to prove though and as you can see, 10 games in, he’s done alright for me.

Bernard: His career seems to have stagnated since his move to England, but hopefully he’ll reignite his career at Schalke.

That swallowed up my entire budget for the season. I’m not really sure why the board are being so stingy with funds as there’s plenty of money in the bank. I’m not really looking for big spending power, just a new centre back would be nice. Nevermind, it adds to the challenge.

I’ve been tasked with investing in youth and I’m pleased to say, we’ve got a lot of youthful prospects here. The U19’s team looks like there could be a few gems among them, without getting into it too much, here’s a look at how my assistant rates them. 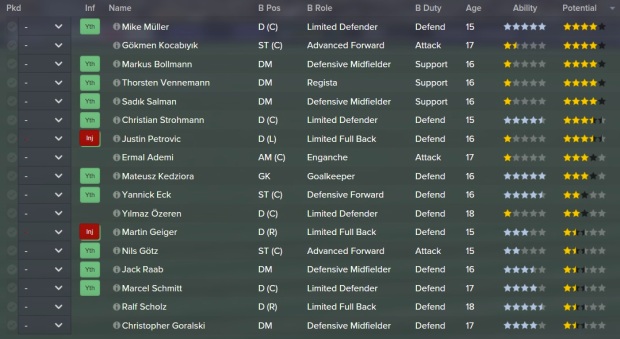 We’ve got a fairly young first team squad with an average age of 23.65. There’s still a good bit of experience in there as five of my first eleven are 27 or over, but I’ve got a good mix of youth among them. I’m basically building my team around the talents of Max Meyer, Leon Goretzka and Martin Schroder. That midfield triangle has the perfect mix for me. Draxler and Bernard run things from out wide and I’m still trying to figure out who my best striker is. Advijaj seems the most obvious choice, but has performed averagely in the games he’s played so far. There’s some youngsters who I think can be great, but not sure they’re totally ready for consistent first team football.

Tactically I’ve fiddled about with a couple of ideas but settled on a 4231. Not a formation I’m overly fond of, but it seems to be doing well for me so far. Stuck with a counter attacking style as I think it suits us and I’ve really enjoyed using counter on FM15. I don’t want to get into tactics too much as it’s pretty relative to the players you have at your disposal. I’ve done a tactical post in the past, you can check it out to see how I think about tactical setups.

I tried a couple of formations before settling on this one. 4411 with 2DM’s was my original plan, then just a standard 4411, but this seems to have brought the best out of my midfield. 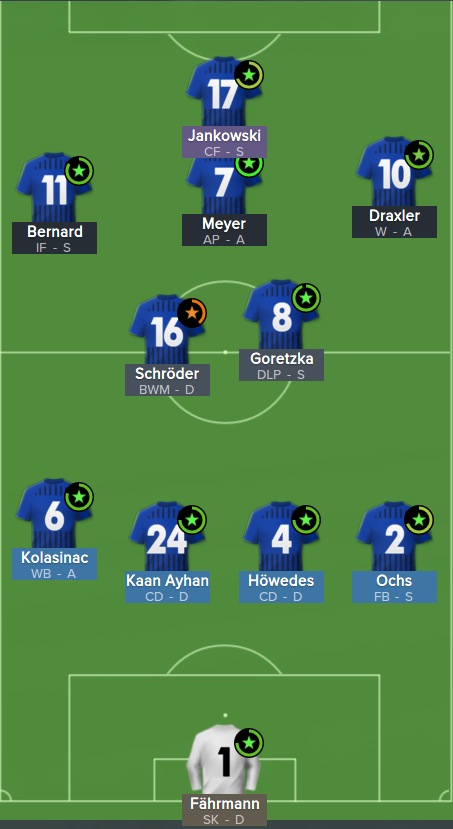 Targets for this club are a bit up in the air at the moment. I feel like I could be at Schalke for a few years. I’ll have a better idea at the end of the season. I’m aiming for a Champions League spot this season though. Anything beyond that is a bonus.

And that’s that. I’m in November already and really happy with how things are progressing so far. Should hopefully knock a season out during the course of the week and have a blog up reporting on season 1.